NFL playoffs schedule, Super Bowl basics and everything you need to know about when and where can you watch on Sky Sports

The road to Super Bowl LVII in Arizona on February 12 continues with the Conference Championship games this Sunday, live on Sky Sports NFL; here is all you need to know about the NFL playoffs, including which teams will play each other, as well as the key dates and timings for the games 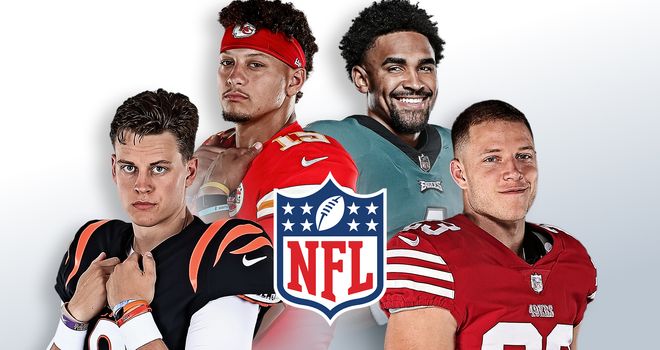 We have our final four in the NFL playoffs! Conference Championship Sunday is upon us this Sunday, with Sky Sports showing both games live.

Starting with the NFC, No 1 seeds the Philadelphia Eagles host a red-hot San Francisco 49ers side who have won their last 12 straight (8pm kick-off), while the Cincinnati Bengals then travel to Arrowhead Stadium to take on the AFC No 1 seeds, the Kansas City Chiefs, in a repeat of last season's title game (11.30pm kick-off).

But what actually are the playoffs and how do they work? Here is all you need to know about the NFL's postseason, as well as the key dates and timings - with every game shown live on Sky Sports NFL - in the run-up to Super Bowl LVII in Glendale, Arizona on Sunday, February 12.

How do the playoffs work?

At the end of the regular season, a total of 14 teams advance to the playoffs, including the teams with the best record in each of the respective four divisions per conference, plus a further three 'wild card' teams determined by which teams own the next-best records in each conference.

The 2022 season is only the third time that 14 teams qualify for the playoffs, after the format was changed from 12 teams in 2020.

The respective winners of those two matchups then meet in the Conference Championship games, in what effectively amounts to the semi-finals for the Super Bowl as we find out who advances from each conference to play in the big game which, this year, will be held in Arizona on Sunday, February 12.

Who will meet in the playoffs?

What do we know about Super Bowl LVII? State Farm Stadium in Arizona will play host to this year's Super Bowl on Sunday, February 12

This year's Super Bowl will be the 57th in the history of the NFL. It is to be held at State Farm Stadium in Glendale, Arizona, on Sunday, February 12 - live on Sky Sports NFL.

The stadium, home to the Arizona Cardinals, has a capacity of approximately 73,000 and has played host to two Super Bowls previously - both epic encounters. The New York Giants defeated the New England Patriots 17-14 in the first of those, to cap the 2007, as David Tyree's famous 'helmet catch' helped deny Tom Brady and the Patriots a perfect, undefeated season. Then, seven years later, New England were back again and this time ran out 28-24 winners over the Seattle Seahawks after Malcolm Butler's incredible interception on the goal line in the final throes of the game.

The Los Angeles Rams defeated the Cincinnati Bengals 23-20 in last year's title game, while the Patriots and Pittsburgh Steelers share the record for the most Super Bowl wins, with six. Brady, however, tops the lot. He has more Super Bowl victories than any one team, with seven to his name. 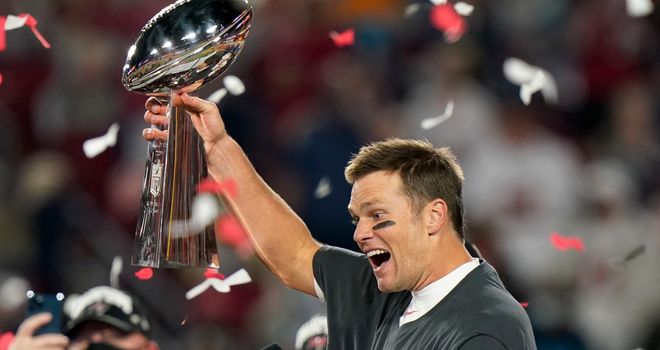 Tom Brady has won a record seven Super Bowls, six coming with the New England Patriots and his seventh two years ago with the Tampa Bay Buccaneers

Rihanna will perform at this year's Super Bowl half-time show, having previously declined the invitation in 2019 in a show of solidarity with former player Colin Kaepernick, who left the league two years earlier after he began to take a knee during the pre-game national anthem in protest at racial injustice in the US. Last year's half-time show was headlined by Dr. Dre, Snoop Dogg, Eminem, Mary J. Blige, and Kendrick Lamar, along with a surprise guest appearance by 50 Cent. Notable performers in the past include The Rolling Stones, Coldplay, Beyonce and Katy Perry.