Tony Bellew believes David Haye will "quit" if their grudge fight becomes too demanding at The O2 on March 4.

The Merseysider is preparing for his eagerly-awaited domestic clash with Haye, live on Sky Sports Box Office, and has questioned the desire of his 36-year-old opponent.

Haye made his comeback after a lengthy injury lay-off this year, but Bellew has suggested the former two-weight world champion does not have the same mental toughness and plans to push him to breaking point.

"What I will tell you is, if this fight goes past four rounds, he's going to quit," said the current WBC cruiserweight champion

"At some stage, it will get too hard and he will quit. He hasn't got the fight in him anymore. 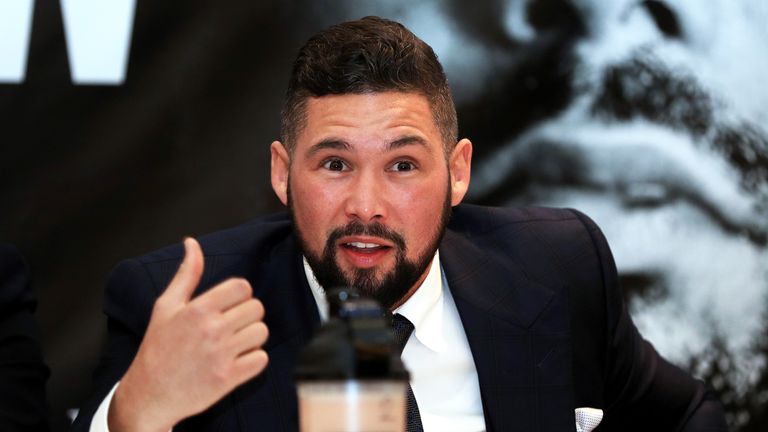 At some stage, it will get too hard and he will quit. He hasn't got the fight in him anymore.

"I love fighting. I am not 100 per cent in the head, I enjoy having a fight. We will see on March 4, where it happens, when it happens, but I must stress when I knock out David Haye on March 4 - I am then the best heavyweight in the world outside of them champions.

Customer winter madness offer: save over 40% on your Sky Sports

"Just let that sink in and think about where do I go from there."

Bellew does concede that Haye is the "most dangerous" heavyweight in the world, although he expects to emerge the winner from either a gruelling battle, or a four round firefight.

"He's the best heavyweight in the world outside of the champions," said Bellew. "There is no debating that whatsoever.

"He's possibly the most dangerous heavyweight in the world, including the champions. What does he do very well? He has got a massive right hand. His technique's not the best but his fantastic athleticism allows him to make up for that.

"If I can drag him to the second half of the fight and to the deep waters, I will drown him, I will win easy, but I don't think it will get that far.

"I do believe this fight could be a four-round shootout and I am under no illusions if he catches me clean in the first four rounds I am going to have to get off the floor to win, but make no mistake he's going to have to do the same thing.

"The big difference between me and him, he hasn't got it in him to get off the floor."