Tony Bellew has branded David Haye as a "disgrace to boxing" after being angered by his "vicious" threats ahead of their heavyweight fight.

The Merseysider has been embroiled in a heated feud with Haye ahead of their showdown at The O2 on Saturday March 4, live on Sky Sports Box Office, and the bitter rivals will come face to face again next week.

Haye threw a punch at Bellew as tempers boiled over at their press conference in November and the two fighters had to be separated again during the filming of 'The Gloves Are Off,' which will be shown on Sunday night.

Controversy has followed Haye throughout his career as he brawled with Dereck Chisora at a press conference, was warned about comments ahead of the Audley Harrison fight, and wore a t-shirt with the severed heads of Wladimir and Vitali Klitschko.

Asked about Haye's pre-fight antics, Bellew exclusively told Sky Sports: "He's a disgrace. It's not the way we want our sport to be perceived. We're not in the dark ages. 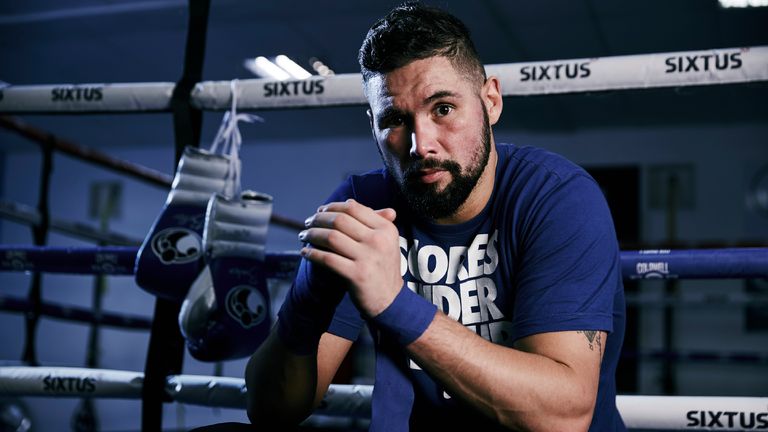 I've got no malice or real nastiness in me to say these vicious, horrible things.

"I'm trying to give it a good image. I'm not the best one to do it, because I've done some stupid things. I only speak the truth. He's just an idiot, he doesn't think before he speaks.

"I've got no malice or real nastiness in me to say these vicious, horrible things.

"He carries the sport in a bad way. I'm not saying I'm a saint by any stretch of the imagination, because I'm not, but I'm nowhere near this clown's level. He is just a disgrace to boxing."

Bellew, the current WBC cruiserweight champion, stepped up a division to share the ring with Haye and wants to inflict a humbling defeat on his outspoken opponent.

"If he loses to me, it will be the worst thing that has ever happened to him," said Bellew. "But like I say, I'll give him the rematch.

Backstage: The Gloves are Off

"If he loses to me, his rep and his ego have just been eaten, and I'll enjoy it when I put salt and pepper on them after I've finished."