Claressa Shields' challenger Ema Kozin ahead of middleweight title fight: 'I don't feel any pressure because of who she is'

"I see it as a huge opportunity and not as some kind of burden" - Ema Kozin aiming for major upset against Claressa Shields on February 5, live on Sky Sports 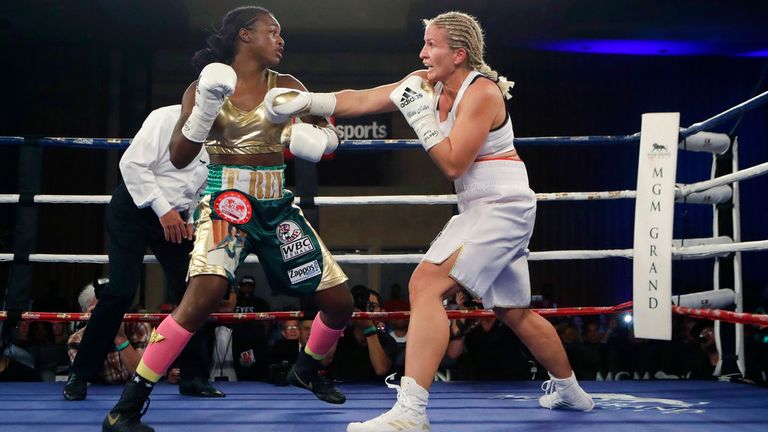 Is this Claressa Shields' best KO?

Claressa Shields has been warned that her "reputation" will count for nothing in her UK debut when she fights Ema Kozin.

Shields' IBF, WBA and WBC middleweight championships will be on the line in Cardiff on February 5, live on Sky Sports, on the Chris Eubank Jr vs Liam Williams undercard.

"This win would be historic for myself and for my country," said Slovenia's Kozin.

"Claressa certainly has a good reputation and is one of the greatest female boxers out there, but I don't feel any pressure because of who she is.

"I see it as a huge opportunity and not as some kind of burden."

The 23-year-old Kozin has worked her way up the rankings earning 10-round unanimous decision victories over former world title challengers Maria Lindberg and Chris Namus. Most recently, Kozin stopped Radana Knezevic in two rounds in May 2021 as she awaited this showdown with Shields.

"I have been preparing specifically for this fight for more than half a year and I've made a lot of progress as a fighter," said Kozin.

"I'm feeling ready, excited and eager to show everything I've learned in this ring."

America's feted Shields, who has won two Olympic gold medals, world titles in three divisions and undisputed titles in two divisions, knows a dream clash with Savannah Marshall awaits this year if he can dispose of Kozin.

"The boxing fans can expect a good fight," said Kozin.

"I'm going to go in there and make this interesting for everyone watching. I will give everything I have like I always do and show the world how tough a fighter I am."