Claressa Shields on whether she is up for a rematch with Savannah Marshall in America: "If that's what the fans want, then absolutely that's what we are going to do" - Shields beat Marshall via unanimous decision as pair headlined first all-female bill in UK boxing history 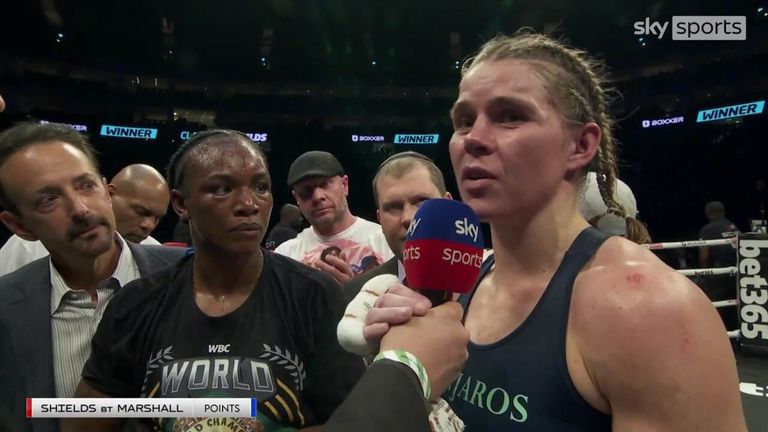 Savannah Marshall said Claressa Shields was undoubtedly the greatest women's boxer of all time after the American won their thrilling undisputed middleweight title bout at The O2 Arena.

Shields was the self-proclaimed GWOAT but is now seen that way by British boxer Marshall after taking Saturday's stunning, historic clash via unanimous decision.

The 27-year-old earned revenge on Marshall for inflicting the only defeat of her career - in the amateurs a decade ago - as the two headlined the first all-female bill in UK boxing history in front a sold-out crowd in London.

Speaking to Sky Sports in the immediate aftermath, Marshall said: "Claressa is a brilliant fighter - not as fast as I thought! She has definitely earned the title of the Greatest Woman of All Time. 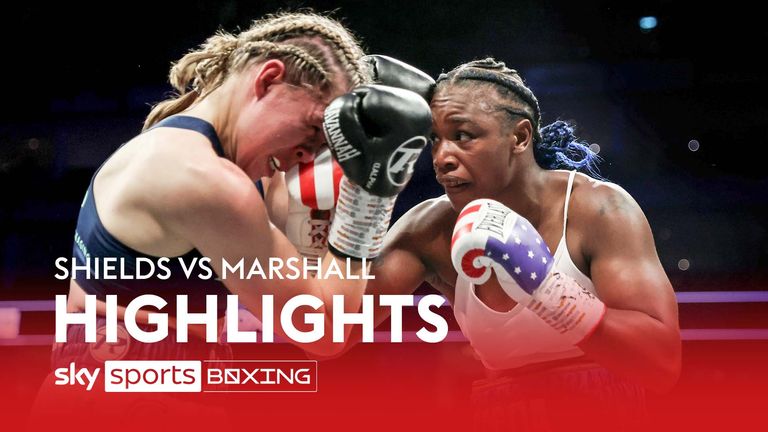 Watch highlights of the epic between Claressa Shields and Savannah Marshall in a fight-of-the-year contender!

"I want to say a massive thanks to everyone who bought a ticket, I really appreciate it.

"It's amazing that two women have sold out The 02. It's unbelievable and I thank everyone from the bottom of my heart." 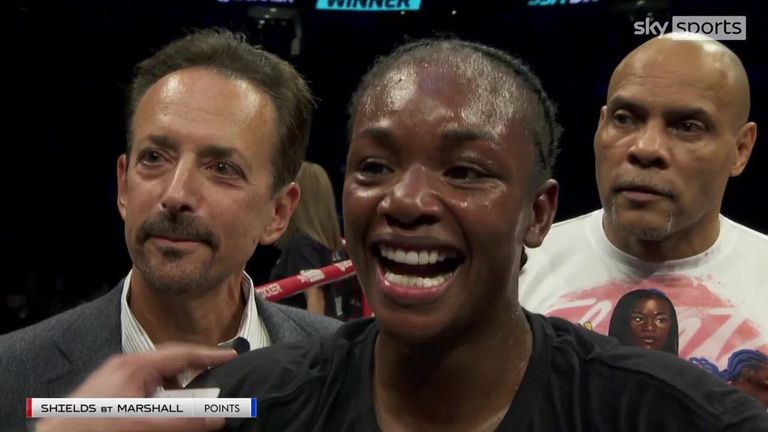 Shields says she would welcome a rematch with Marshall in America

Shields - whose slickness and quickness earned her the judges' decision despite a valiant performance from Marshall - also reflected on a landmark night for women's boxing as well as being given a stiff examination by the Brit.

The American also said she was open to facing Marshall again in a rematch in the United States.

Shields 'absolutely' up for rematch in the States

On potentially meeting Marshall across the pond, Shields told Sky Sports: "There was a rematch clause if there was a controversial decision but it was unanimous.

"If that's what the fans want [a rematch in the USA], then absolutely that's what we are going to do." 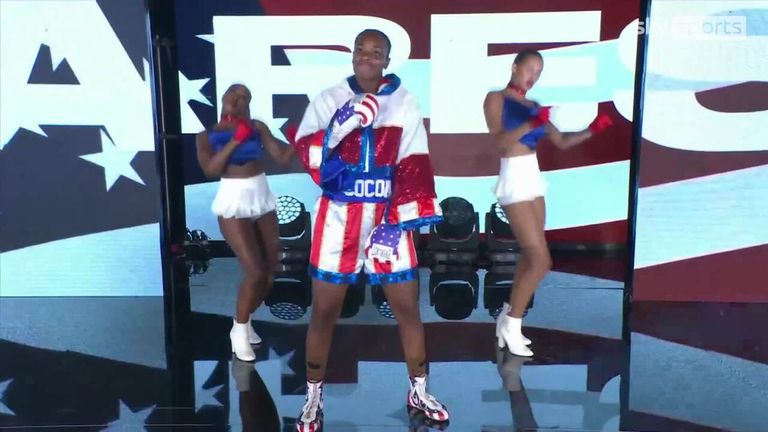 Shields made an unforgettable entrance to the ring for the fight!

A tearful Shields added: "I want to thank Savannah Marshall and her whole team and the UK fans for being here because this is a special moment for women's boxing.

"It's an unbelievable moment. It was a special night for women's boxing and I think it was fight of the year.

"[Savannah] is a tough competitor, hard fighter and has endurance - I couldn't see out of my right eye rounds 6-10 as she hit so hard. 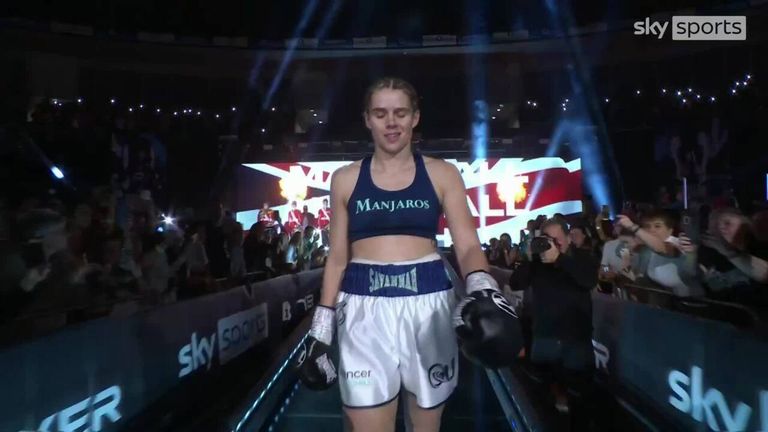 "I am the better fighter. I feel like I am 2-0 against her as I don't think I lost in the amateurs but I guess you can say we are 1-1.

"I know I did the most work today and was winning with those combinations. I did what I do in training and I got the job done.

"I have been working hard for a very long time and no one has given me credit."

Nelson: Shields "backed up every boast"

Sky Sports' Johnny Nelson believes Shields has to be given credit for, not only delivering in the ring, but helping to provide the build-up and spectacle that was delivered to a roaring, packed-out O2 Arena. 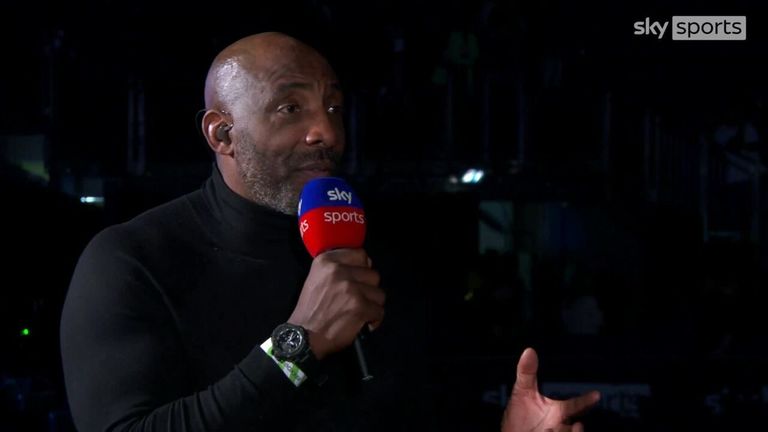 "I though she [Shields] was outstanding. She backed up every boast," said Nelson.

"She was one step ahead in every department when it came to Savannah.

"Like it or not, she did everything you expected of her, she was sharp, she was fast, she was hungry, she was lean and she fought with intention.

"She made it a show, even the entrance, showing up in a glittery ball gown in a Bentley that probably went 200 yards but then she made sure she made a show of it.

"Then the entrance, the performance and then the speech afterwards. 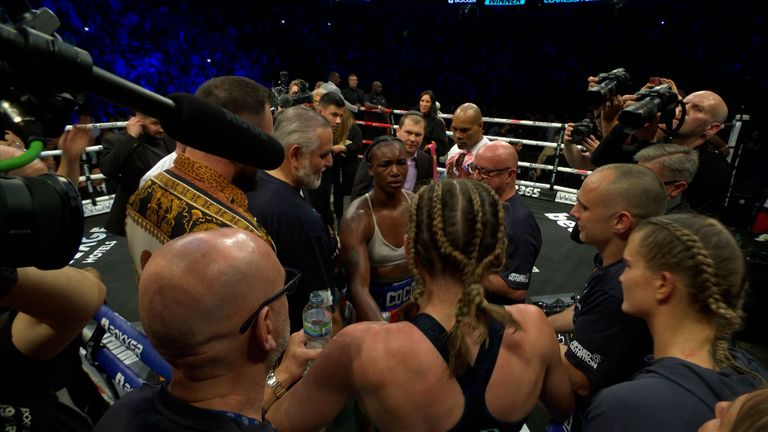 Straight after the their epic fight, Claressa Shields praised Savannah Marshall saying 'it was the hardest fight of my career'

"I actually think she has made herself a hell of a lot more fans over here in the UK and listen there were die hard Savannah Marshall fans but even Savannah said, the best woman won tonight and that is how it was.

"It is her business and these days it is not about just being a good fighter it is about having that whole package.

"I remember Prince Naseem Hamed when people used to come and see him fight, they used to go and just watch the entrance and I think Clarissa thought 'I am going to make a business of this'.

"She had the dancers out there, good fight, lots of energy, nice and upbeat and she doesn't mind being the villain or the hero but either way she backed up the boast."

After a performance that will go down in history, Nelson believes Shields has cemented herself as a "big talent " fighter. He said: "She would get two shots off the mark to Savannah's one and was on point with it as well so she had that concussive punch power but she is a big talent fighter.

"If the opponent is of low level, she will beat them at that level but not impressively.

"If the opponent is of high level, she will beat them at a high level but she will step it up as much as she has to do and that is why she has only been beaten by that one person when she was a kid at 17 years old.

"I think she showed a different side to her but she wasn't hiding anything.

"She said this is me, I wear my heart on my sleeve, I do what I do, I am not afraid of telling you how special I am and if you don't like it, speak for yourself.