Vasiliy Lomachenko walked away from the fight he craved to return to Ukraine when Russia invaded. Now he’s back, and he’s after all the titles. Watch Vasiliy Lomachenko vs Jamaine Ortiz live on Sky Sports Arena from 1am on Sunday morning 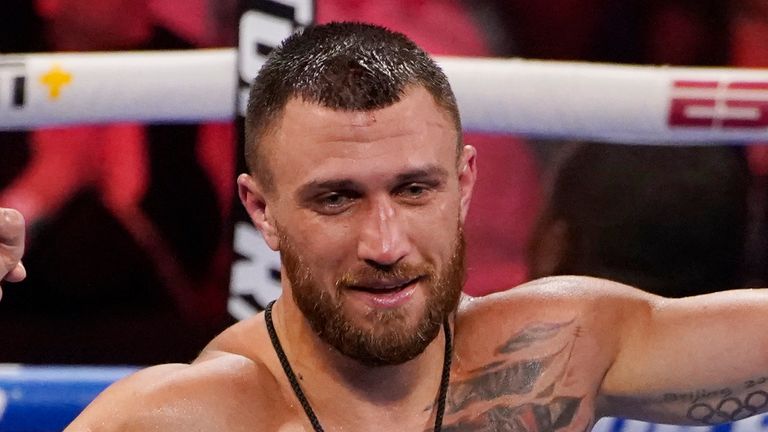 Vasiliy Lomachenko made an extraordinary choice.

Earlier this year he was on the cusp of agreeing a major lightweight unification with George Kambosos. It was the contest he'd longed for since losing his title belts in a shock defeat against Teofimo Lopez.

But when Russia invaded Ukraine, he walked away from boxing to return to his homeland and support the war effort as best he could. 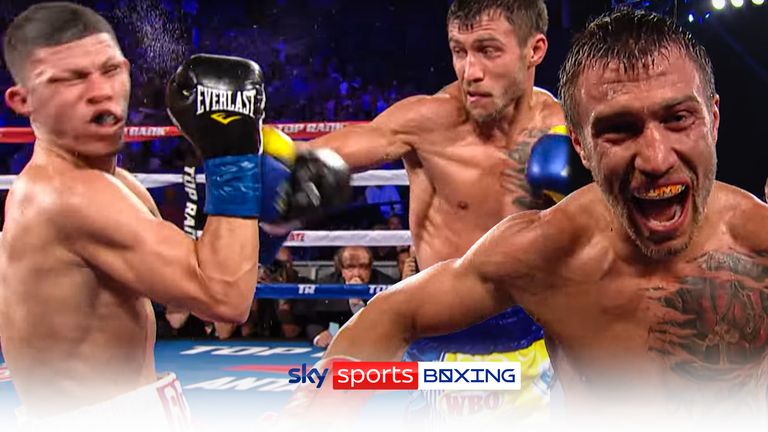 It was a brave decision, selfless too, but Lomachenko didn't hesitate.

Lomachenko didn't know how long the war would last, how he would be able to resume his boxing career or what would happen to him. He was risking it all.

His promoter, Top Rank's Bob Arum explained: "At that particular point when Russia invaded Ukraine, Lomachenko was out of the country. He was training for his next fight in Greece, in some mountain community in Greece. And obviously I called Egis [Klimas, his manager] and I said, 'Hey, stay there'. But he flew back to Romania because all of the airports were closed because of the war at that time in Ukraine and rented a car and drove across the border from Romania to Ukraine to get back.

"He carried the banner of Ukraine in two Olympiads, winning gold medals. He's a proud Ukrainian and it didn't surprise me." 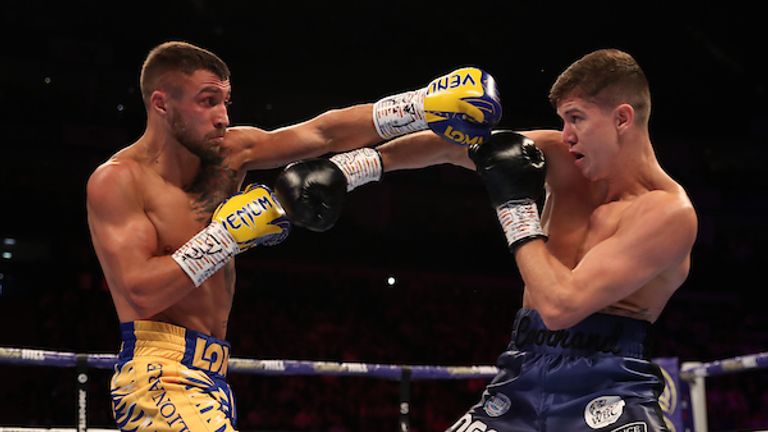 He enlisted with the Territorial Defence Forces. He carried a weapon though didn't have to take part in combat operations himself. The war still affected him directly.

"Yes, we experienced bombing numerous times next to our town, very close to our district. Many times, we had to go down to the cellar to find shelter from bombing which was very often taking place in our area," he said.

Arum reflected: "That says a hell of a lot about Ukraine and about the person Vasiliy is and also Oleksandr [Usyk, who did the same]. What the Ukrainian people mean and how dedicated they are to maintaining their nationality. They have such values."

Let alone the danger he placed him in, that choice to step away from boxing on a point of principle has seen Lomachenko likened to Muhammad Ali, who lost the prime years of his fighting career protesting the Vietnam War.

"It's definitely noble and very courageous for Lomachenko to have done what he did and Usyk too. It wasn't just him, there were a lot of people from Ukraine who left boxing entirely to fight for their country. It's just I have so much respect for them." 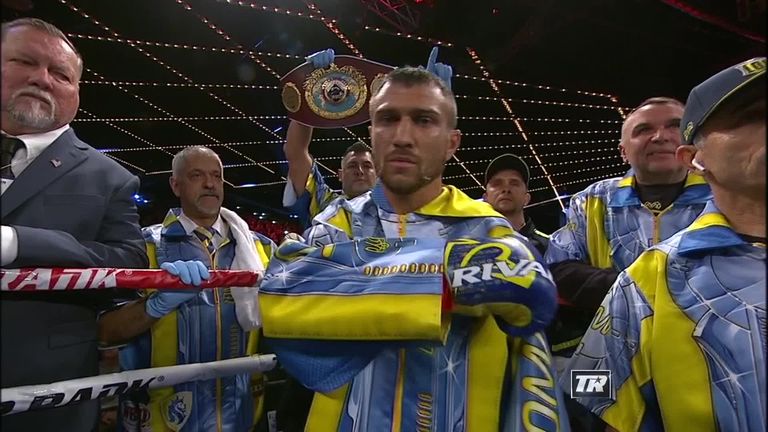 Highlights of Lomachenko's fights demonstrate why he's such a classy boxer

Lomachenko is now able to return to the sport. He will box Jamaine Ortiz at the Madison Square Garden Theater in the early hours of Sunday morning, live on Sky Sports Arena from 1am.

Ali Walsh will be on his undercard. He said: "As a boxer I just respect him to the highest degree. But for someone to leave their sport, what they love, their career, to go fight for their country, it takes a different kind of person.

"He's a special human being, a special boxer and I really think he's going to show out in this next fight because it's his comeback fight."

For Lomachenko he will use this platform and his boxing prowess to represent his country.

"It certainly raises awareness and at the same time it gives an opportunity to people in my country to get distracted, even for an hour or two, from all that's happening. Of course, those who have that opportunity. Those who are in combat right now, out in the battlefield, they will not be able to watch the fight," he said.

Ortiz is someone who has some inside information on Lomachenko. He has seen how the great Ukrainian operates in the gym and has previously sparred with him. That could pose an additional threat.

"I don't know, we'll see," Lomachenko said. "In his arsenal he has good speed, he has good combinations, he has understanding of movement in the ring."

But he warned: "At the same time I sparred him more than he sparred me because he was my sparring partner during training when I had to spar two or three opponents at the same time, so he did not have experience sparring me like one on one. 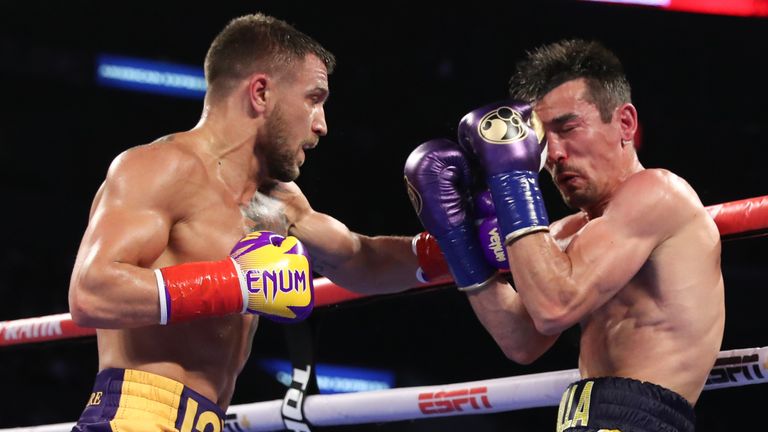 Lomachenko retained his world lightweight titles, stopping Anthony Crolla in the fourth round

"He did not have 100 per cent of me. So I know a lot about him. Probably more about him than he knows about me."

Victory in this fight would set Lomachenko back on course towards his ultimate boxing ambition - the undisputed championship.

Promoter Bob Arum explained that him stepping away from the Kambosos fight had "opened the door for [Devin] Haney to win all the titles".

"Devin's a very good fighter and he went over to Australia and won the fight and was contracted for a rematch. And talking with Devin and his father, they're prepared to, as good sportsmen, to give Lomachenko a shot to win those titles," Arum continued.

If he beats Ortiz, Lomachenko will get the fight he wants. "As long as he doesn't get injured, God forbid, in the war of aggression that's going on in his country," Arum added.

"Vasiliy, I asked if he could stay here after the fight. He said no, he'll take a few weeks and go back to Ukraine and if necessary hold a rifle again.

"Again, there are certain things in life that are much more important than sports and how much money you can make participating in sport."

Winning this bout would take Lomachenko back towards where he wants to be, the top of the lightweight division. "Exactly. That's how I see it, as a step towards the next fight against Devin Haney. But a lot will depend on how our fight on October 29 is going to play out," the Ukrainian said.

Watch Vasiliy Lomachenko vs Jamaine Ortiz, live on Sky Sports Arena at 1am on Sunday morning.