Shah Khan is convinced that his son Amir is ready to take on fighters of the quality of Saul 'Canelo' Alvarez.

He was speaking after the boxing world was stunned on Tuesday by the news that Amir Khan's next fight will be against WBC middleweight champion Alvarez in Las Vegas on May 7.

Khan had been expected to line up a fight against Andre Berto, Brandon Rios or Jo Jo Dan, ahead of possible summer world title showdowns with either Danny Garcia or Kell Brook.

But instead he will take on Alvarez, who is regarded as one of the top pound-for-pound fighters on the planet.

And Khan is likely to be at a weight disadvantage because the fight will be at a catchweight of 155lbs - 8lbs above the Bolton fighter's usual division.

However Shah Khan said the lure of a megafight with Alvarez was too much for his son to resist.

He told Sky Sports News HQ: "Amir always wanted a big fight and this is the reason he was chasing Floyd Mayweather, then Manny Pacquiao.

"After those guys, Alvarez is the guy out there. Amir wants the best fights, the big fights."

Shah Khan confirmed that the fight was proposed to Amir rather than vice versa, adding: "Golden Boy [Promotions] got in touch with us and we were talking with [boxing manager] Al Haymon as well, and we all got together and made it happen.

"The fight was put to us and Amir has never ducked anybody. If it is a big fight, he stands up for it."

Taking on Alvarez will be seen as a daunting task for Khan, who has suffered three defeats in his career, but has won his last five.

"It is a big step," his father acknowledged. "But Amir is at a level now where he is mixing with the big guys.

"His name always gets mentioned with these sort of guys. He deserves these fights and he is up for it. He is ready for these sort of fights as well.

"Amir, when he was younger, when he went to the Olympic Games, nobody gave him a chance even then. They said 'he's a kid, he can't handle these guys', but look what he did [Khan won a silver medal as a 17-year-old in 2004]."

Regarding the potential weight disadvantage, Shah Khan added: "There is 8lbs difference. Amir is a big guy as well, there is not a lot in the height difference.

"We will kind of build up his weight well. His trainer Virgil [Hunter] was up for the fight. He said '8lbs is no problem to us at all'. They will put muscle on him.

"Amir has got good reach, he has a good physique. He is a nice tall guy, with long reach. He is made for that sort of weight."

Brook has long made it clear he is eager to face Khan and it had been hoped that the duo might meet at Wembley in the summer. 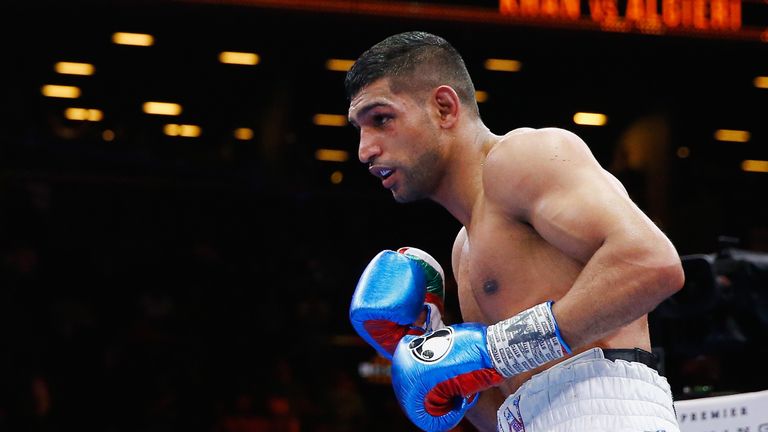 Amir has got good reach, he has a good physique. He is a nice tall guy, with long reach. He is made for that sort of weight.

Shah Khan said: "The fight is always there anyway, it can still happen.

"Amir is preparing for Canelo now and he is looking forward to it. He has never ducked anybody, if he was ducking anybody, why would he fight a bigger guy?