Wladimir Klitschko lost his celebrated cool as he vowed to knock out Tyson Fury in their world heavyweight title rematch.

The 40-year-old (64-4-KO53) came face to face with Fury for the first time since losing his titles to the Mancunian in Dusseldorf last November, and wasted no time in making clear his displeasure at the champion's behaviour.

"What comes out of Fury's mouth - a lot of the statements are disrespectful," Klitschko told a press conference to promote the WBA 'Super' and WBO titles showdown in Manchester on July 9. 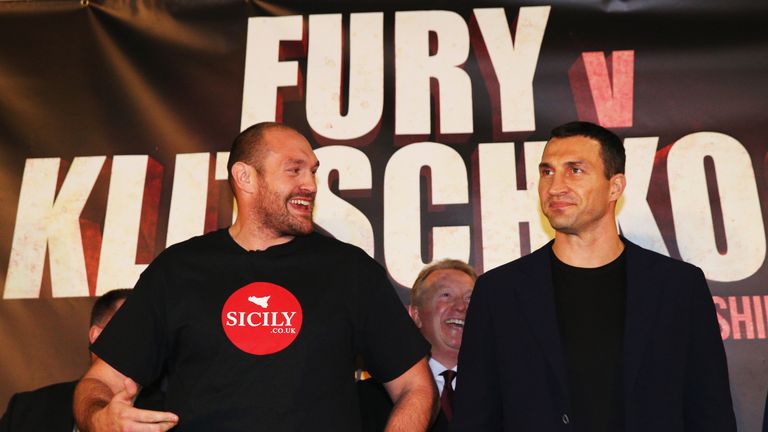 I would like to see boxing as a sweet science with a good image that everybody can follow, get into the ring, be an athlete and be respectful.

"That all homosexual men and women belong in the same place, all women belong either in the kitchen and on their back... so that's where he sees Elton John and the Queen?

"To Tyson Fury and all the people out there who think the same way, I want to say: **** off.

"It's definitely something that affects the sweet science. I would like to see boxing as a sweet science with a good image that everybody can follow, get into the ring, be an athlete and be respectful."

Klitschko faced criticism from Team Fury in the build-up to the first fight over alleged attempts to manipulate home advantage, when rows erupted over the amount of foam used in the ring and Klitschko's hand wraps being carried out in private.

The former champion reacted dismissively to a reporter's suggestions that his previous victims may feel short-changed by their defeats under his chosen conditions.

He said: "Your question is nonsense. I will not give you any comments that I can't wrap my hands.

"That tree is going to fall down hard. He's tall and all the safety is out there for fighters to protects hands and heads. I'll give no comments to the nonsense question.