'Iron' Mike Tyson in his own words as he turns 50

“Tyson doesn’t even exist anymore – this is me, Michael, doing what I always wanted to do.” On his 50th birthday, ‘Iron’ Mike Tyson has mellowed from his ferocious heyday but remains a boxing figure more recognisable than anyone except the great Muhammad Ali.

Four years ago he visited Sky Sports to share stories from his unique career, and as Tyson now turns 50 we have revisited those words that tell the ultimate story of the fighter he was, and the man he has become.

"I come from a gang-ridden, drug-ridden, bad neighbourhood," Tyson said about his New York upbringing that saw trainer Cus D'Amato take legal guardianship of him as a 16-year-old when his mother died.

Having found a natural propensity with his fists in defence of his beloved pigeons, Tyson found the boxing gym. "Cus wouldn't let me leave," he said. "He kept building up my confidence. I was just a street kid but he made me believe I could be the best on the planet."

Tyson became the youngest ever heavyweight champion aged 20 when he thrashed Trevor Berbick inside two rounds, a year after D'Amato had passed. "I wouldn't be denied because it was me and Cus' dream," he said. "He believed it, I didn't believe it." 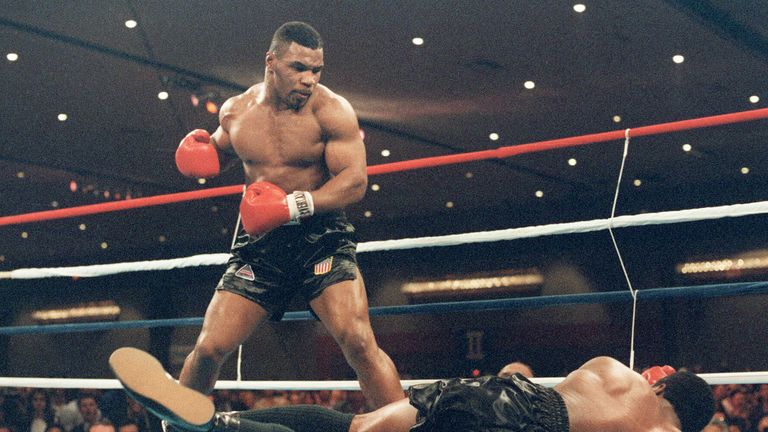 I wouldn't be denied because it was me and Cus' dream.

The wrecking ball rolled on and crushed Michael Spinks in one round, as Tyson learned how to utilise the fearsome reputation that preceded him. Asked if Spinks was his best win, he said: "I don't think so because I was fighting a guy who was intimidated, who didn't fight back.

"Because of my hard work in training and what I had to overcome, I thought Larry Holmes was my best fight. He was so difficult to hit. You can never hit him with a left hook, his arms were too long."

Describing those years, he remembers: "Glory, this is going for history and prosperity. Everybody will see this years after I die. Like Achilles, John L. Sullivan and guys that lived eons before me, everybody will know my name too."

As WBC champion he extended his record to 36-0 by stopping Frank Bruno, whose effervescence raises a smile to Tyson's gold-plated grin. They sparred, Tyson revealed, when he was 16 and he "did good for a kid". The late-80s were the glory years for boxing's most terrifying prospect but the wheels were coming off - he fired trainer Kevin Rooney, divorced Robin Givens and had contracts issues with Don King.

The notorious loss to Buster Douglas that ended a 37-fight unbeaten streak came amid rumours he had taken his eye off the ball. Twenty-two years after losing WBC, WBA and IBF gold in one of sport's biggest upsets, Tyson said: "My feelings were hurt but I didn't take it like other people might take it.

"I never took those situations personally back then but I knew I disappointed myself. I don't need nobody to address what I do. When it's your fault, it's your fault. I knew I would be champion again, I knew I made a mistake."

A three-year prison sentence followed and upon his 1995 return he had the intimidation factor that Tyson is known for, and he remembers using it to his advantage.

"Intimidation is legal in all arts," he said. "In business, sports, conversation, negotiation. I could never have been successful just being Mike Tyson, just some tough kid from Brooklyn. I was smaller, everybody was bigger than me. I sold it to them and they bought it so now I'm 'the baddest man on the planet' and a scary guy. 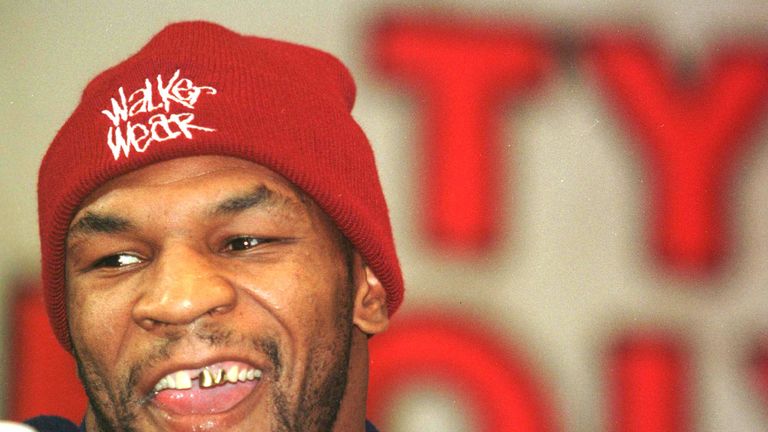 I sold it to them and they bought it so now I'm 'the baddest man on the planet' and a scary guy.

"I loved the whole image of who I was. Not now, but back then that's who I wanted to be - an invincible champion who nobody could beat." So did it affect opponents? He thinks so.

"I wasn't really interested in boxing after 1990. I was getting great money and the guys were easy to beat, I got addicted to that situation. I just wanted to live a good life. I had more problems with myself than I had with anybody else.

"I was out of my league, I couldn't see what was coming. That's how I wanted to live my life. I had an exciting life but it was pretty reckless. Being the champ can be addictive, believing you're more than you are."

A string of fearful opponents ended with Evander Holyfield, who won a spiteful 1996 fight but could never have foreseen Tyson's revenge. The bite, 20 years later, might be Tyson's defining moment.

"He had my number, that guy. He stood up to everybody, he was a great fighter.  He overcame a lot of adversity as well, and those are the guys I respect as fighters. I'm sorry, Evander."

They say a knockout punch is the last thing to go. Tyson's speed and bob-and-weave style were fading. His fiery reputation was enhanced against Francois Botha and Lou Savarese during a period where he finally slipped off-the-rails. A visit to Brixton nearly caused a riot, and his win over Julius Francis in Manchester defied original orders to ban him.

It would be easy to claim his fight with Lennox Lewis came too late for Tyson to do himself justice but he makes no excuses for losing. He said: "I just wanted to get in there and land some punches, I knew if I landed good punches I could hurt him. But he was a magnificent. I won a lot of fights so I can't be disappointed. 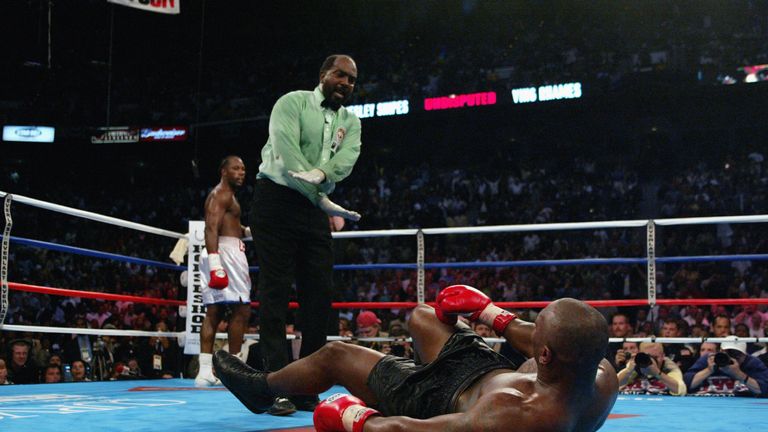 A year later in 2003 a tribal tattoo adorned his face but he filed for bankruptcy after squandering, by his estimation, $300-400m. He had owned a Bengal tiger, million-dollar bathtubs and countless cars but nothing could buy back his in-ring success. He lost to Danny Williams while injured and, as the spirit slipped away, quit before the seventh round against Kevin McBride in his final fight.

His tattooed face might be more memorable than most, but that face no longer snarls as he turns 50. What's his legacy? "It's up to the people to decide where I rank in history," he said. "But from what they tell me, it's pretty high."