Carl Frampton would welcome a world title unification clash with Lee Selby in Belfast this summer if he wins his rematch with Leo Santa Cruz.

The Belfast man battled to a thrilling points win over Santa Cruz to claim the WBA 'super' title last July and the featherweight rivals will fight again in the early hours of Sunday morning in Las Vegas, live on Sky Sports.

Selby defends his IBF belt against Jonathan Victor Barros on the same bill at the MGM Grand and could set up a possible fight against Frampton, with two world titles at stake.

"I think that's a huge fight," Frampton told Sky Sports. "It's appealing to the boxing public, especially in the UK. Maybe not so much in the States, but it's a big fight in this part of the world. 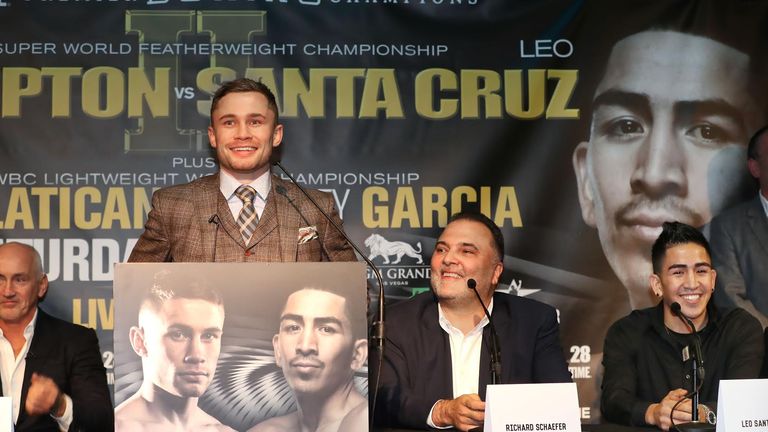 If he's willing to come to Belfast and have a unification fight with me in the summer after I beat Santa Cruz, then I'm happy to have it.

"I believe, although Lee has been more established as a featherweight, and he's had a few defences of his title, I believe I'm the draw in that fight. I'm the one that sells the tickets and if the fight is going to happen, it happens on our terms and happens in Belfast.

"If he's willing to come to Belfast and have a unification fight with me in the summer after I beat Santa Cruz, then I'm happy to have it."

Frampton holds Selby in high regard and believes victory over the Welshman will be another notable achievement in his 23-fight unbeaten career, which includes winning world titles at two weights.

"He's a very good fighter, he's someone who I have talked about a lot and I respect him," said the 29-year-old.

"I think him and his brother Andrew are two of the most skilful fighters in the UK, but I just want to be involved in these big fights.

"It's another unification fight, it's another chance for me to create more of a legacy and more history. These are the type of fights that I want to be involved in."