Deontay Wilder wants Anthony Joshua to beat Wladimir Klitschko so he can face him in a unification "mega-fight".

The WBC heavyweight world champion will be ringside and working for Sky Sports Box Office at Wembley Stadium on Saturday night.

You can book the huge Wembley event online here

Wilder still views the heavyweight showdown as a genuine 50-50 but wants the 27-year-old Brit to remain unbeaten and set up a multi-title fight further down the line.

"I would love to scrap with both of them but particularly Joshua," he exclusively told Sky Sports. 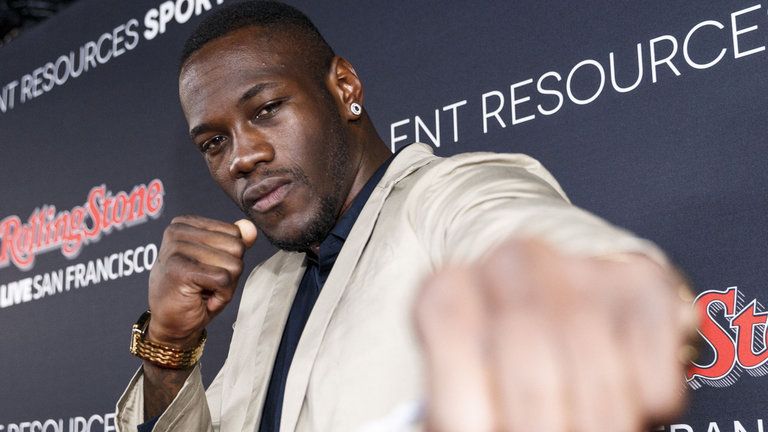 They are now looking for the younger generation and they want young and strong fighters and when they ever talk about the massive fights they want to see, they always talk about Joshua and me.

"Now, even though he is fighting Klitschko, the fans - even over here - want a Wilder-Joshua fight.

"For me, over here in the US, it is a bit strange they are all talking about and advertising us [Wilder and Joshua] and asking people who they want to see.

"Everyone wants to see it and I am all for giving the fans what they want.

"You only see mega-fights in boxing once in a while and in the heavyweight division, I think that would be the most exciting and the best in the history of heavyweight boxing for a long time.

"They are now looking for the younger generation and they want young and strong fighters and whenever they talk about the massive fights they want to see, they always talk about Joshua and me."

Wilder rates Klitschko as a "good lad", having been his sparring partner in the past, but the American now wants to emulate him and become the undisputed heavyweight world champion.

The WBC holder, who stopped Gerald Washington in five rounds in February, is hoping to make his sixth title defence in the summer and arrives in the United Kingdom on Thursday to tell the winner his plans.

"I am happy to be part of the WBC and to represent the WBC and to have one of the most prestigious, well-known and respected belts in boxing," he said.

"But I am just looking to unify. I want to unify the whole division.

"The first man to unify the division since Lennox Lewis is going to create a massive audience and be praised for the rest of their career.

"It will be a great achievement to do and I am looking to be the man to do it."