WBC heavyweight champion Wilder hasn't yet finalised his next challenger but a possible defence against Ortiz has been mooted.

Joshua is expected to defend his IBF title against mandatory challenger Kubrat Pulev next but with Ortiz his mandatory WBA challenger, Hearn would be happy to see the Cuban go down a new route. 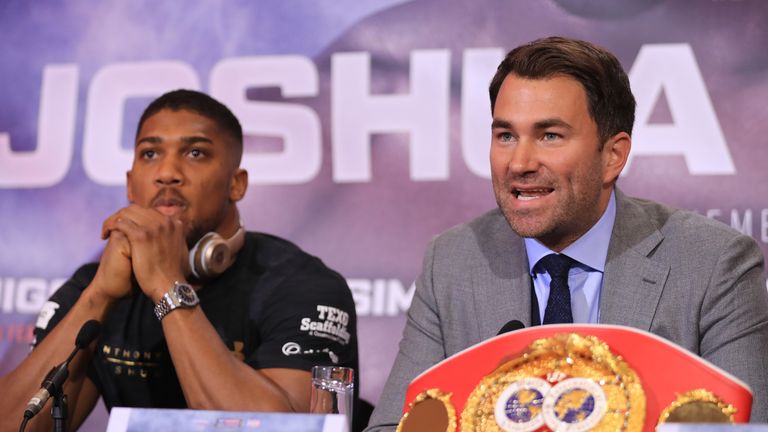 [Wilder v Ortiz] brings a unification fight closer, rather than waiting for next summer.

"As I'm hearing it, Ortiz could fight Wilder which is a great fight. If he does, we'd like to fight the winner," he exclusively told Sky Sports. "AJ is up for fighting anyone.

"It brings a unification fight closer, rather than waiting for next summer.

The WBC are committed to pitting their champion, Wilder, against his peers to crown an undisputed champion according to the organisation's president Mauricio Sulaiman.

Wilder vs Joshua in 2018 is Sulaiman's hope, he exclusively told Sky Sports last week in Las Vegas: "We will do whatever is possible and necessary to make it happen."

"That's the fight everybody wants to see. Joshua is a tremendous attraction and a positive role model, and Wilder is the same.

I Control My Destiny 💥 pic.twitter.com/J5XgPJdlpC

"Two undefeated champions should meet in the ring as soon as possible. Both have commitments to finish, so next year is the time to meet."

Asked if the WBC would put their belt alongside other organisational titles for an undisputed championship fight, Sulaiman replied: "Absolutely."

Watch the NXTGEN card involving Buatsi, Okolie, Benn, Cordina and more, live from York Hall on Friday, via our live stream and Facebook live and on Sky Sports Action, from 7.45pm.