Joshua vs Parker: Joseph Parker can use nerves to his advantage, says Matthew Macklin

Joseph Parker will face Anthony Joshua in a world heavyweight unification fight in front of 80,000 fans at the Principality Stadium in Cardiff but despite the enormity of the occasion, Matthew Macklin believes the New Zealander can use nerves to his advantage.

The undefeated WBO title holder and Joshua, the WBA 'super' and IBF champion, faced the cameras for the final media conference ahead of their bout on Saturday, live on Sky Sports Box Office.

Joshua, who holds a 20-0 unbeaten record of his own, has already revealed he is nervous at the thought of losing his perfect record but attention turned to his opponent's state of mind on Tuesday.

"You could see he was a little bit apprehensive. There were butterflies there but I also thought he looked well, confident and spoke well.

"They are bouncing into this fight as an underdog but a very live underdog."

Joshua will have home support on his side once again for his third successive stadium fight but Macklin admits the Brit will need to be wary of a knockout blow.

"There will be a bit of edginess there. He [Parker] will have butterflies. This is the biggest fight of his career by a mile.

"You could say it is the biggest fight of Joshua's career but the [Wladimir] Klitschko fight was pretty epic and he was fighting a legend at the time. 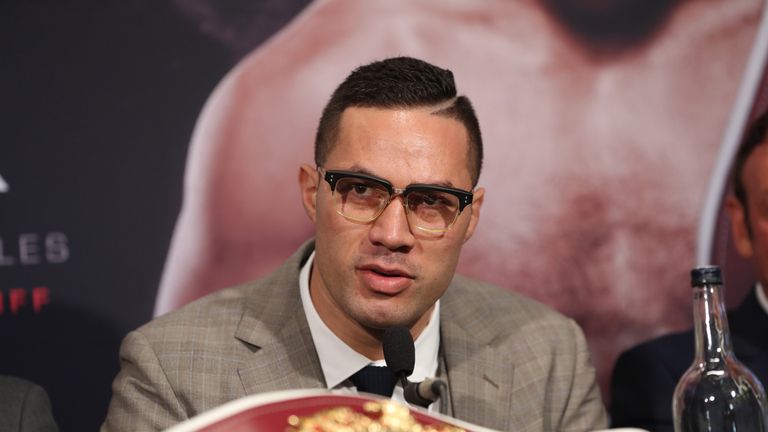 They [the Parker camp] have been in Las Vegas and had great sparring. He will think this is my night, my time.

"Joshua is more used to it, this is the first time that Parker has been in an event like this so there will be nerves all-round.

"He is the favourite, the underdog is Parker so the pressure is on Joshua. These events are great so long may they continue. It is a two-horse race in boxing - one punch can finish it, particularly in the heavyweight division.

"There will be a partisan crowd in Joshua's favour but Parker is an undefeated champion. He will totally believe in his game plan.

"They [the Parker camp] have been in Las Vegas and had great sparring. He will think this is my night, my time."