Joseph Parker's promoter questioned the performance of the referee in Anthony Joshua's points win, but voiced his respect for the unified British heavyweight champion.

Italy's Giuseppe Quartarone was the third man in the ring as Joshua outpointed Parker on Saturday, adding the WBO belt to his IBF and WBA belts.

"I don't need to say much. Everyone is saying it for us," Parker's promoter David Higgins told Sky Sports.

"When they were brawling, there were hints of Joe almost getting in there, but everyone is saying - not me - people who know a lot more about boxing were saying that ref allowed Anthony Joshua to execute a very disciplined, conservative fight plan, which did suit Joshua and did not suit Parker.

Parker: I have no regrets

"Now let's not pursue an accusation of bias, but often there is subconscious bias etc, etc and I think anyone that knows boxing would not deny that the referee's style of conduct suited Joshua and not Parker, but we're not going to use that as an excuse.

"We didn't quite do enough today to win the fight. If there was a rematch, would we accept that referee again? Certainly not."

Higgins was full of respect for Joshua, who remains unbeaten in 21 fights. 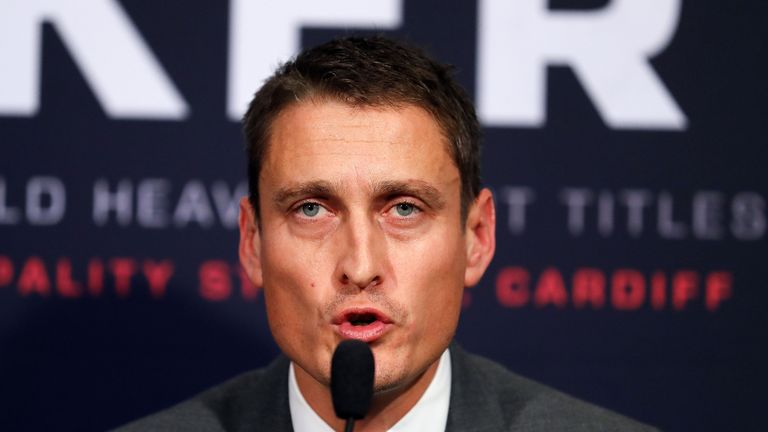 I have worked with boxers who have got broken or given up. Joseph is not one of them. I saw the look in his eye, this has made him hungrier and he'll want to come back as soon as possible and learn from his mistakes

"I thought that Anthony Joshua was a better boxer today, deserved to win," said Higgins. "I don't think Joseph Parker did quite enough to win in [the UK].

"Joseph fought valiantly and I'm proud of him, he can hold his head up, but I respect Anthony Joshua and he won the fight.

"The Joshua that fought Carlos Takam, might not have won today, but respect to Joshua, because he lost weight, he came in fit, and he was disciplined. He boxed well for 12 rounds. He won the fight, good on him.

"Today he looked like a man that was serious. He did show Joseph respect, rightly so.

"Joseph showed no signs of going down, being overly hurt and was there right to the end. Had a few skirmishes developed, a few more brawls, anything could have happened.

"There was certainly not [disappointment] after the fight, because Joe did the best he could. There were smiles and hugs and music.

"I have worked with boxers who have got broken or given up. Joseph is not one of them.

"I saw the look in his eye, this has made him hungrier and he'll want to come back as soon as possible and learn from his mistakes. I have no doubt that these guys will fight again, sooner rather than later."