Anthony Joshua's next fight is 'very likely' to be against Deontay Wilder or Alexander Povetkin, says his promoter Eddie Hearn.

Negotiations have started for a world title fight between unified champion Joshua and WBC king Wilder, but the WBA have now ordered the British star to negotiate a mandatory title defence against Povetkin within the next 30 days.

Povetkin stayed in line for a shot at Joshua's WBA 'super' belt with a knockout win over David Price and Hearn admits his fighter's shortlist of next opponents appears to have shortened to just two. 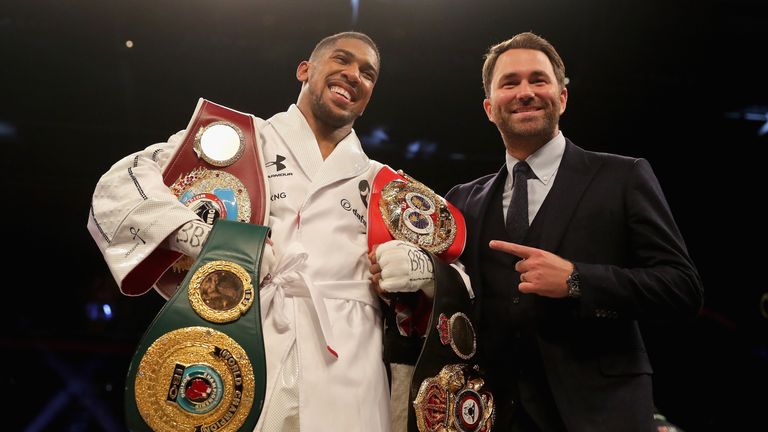 At this stage it means it's very likely Anthony's next fight will be between Wilder or Povetkin.

He told Sky Sports: "The WBA called the mandatory yesterday for AJ to face Povetkin next.

"We have a 30 day window to negotiate - at this stage it means it's very likely Anthony's next fight will be between Wilder or Povetkin."

Povetkin's promoters World of Boxing posted on Twitter: "Povetkin is now a mandatory contender of Anthony Joshua. He was appointed by WBA.

📢@Ryabinskiy
Povetkin is now a mandatory contender of @anthonyfjoshua
He was appointed by WBA. Now there are 150 days to arrange the fight, it must take place. Before the fight with Sasha, Joshua has no right to fight with anybody else.We have 30 days to negotiate@EddieHearn pic.twitter.com/abLOV55hew

"Now there are 150 days to arrange the fight, it must take place. Before the fight with Sasha, Joshua has no right to fight with anybody else. We have 30 days to negotiate."

Vadim Kornilov, who heads Povetkin's promotional team, believes a fight could be staged in Russia.

"It would, depending on the timing, fill up the new [81,000 seater] Luzhniki Stadium - a football stadium," he said. "That's a location with enough magnitude for this type of fight."

Joshua's ultimate goal is to unify all four major belts with Deontay Wilder, an occasion that would take precedence over his mandatory obligations.

Wilder's representative Shelley Finkel told Sky Sports: "The deal was 50-50 [between Joshua and Wladimir] Klitschko. The [Wilder] fight should be bigger than Klitschko.

"We already said we would accept less than Klitschko. The fight with Parker was 33 [per cent to Parker].

"Hopefully [Friday], we'll have an offer from them, because that's what he's said he's doing."

Hearn added: "Anthony wants the fight and I'm very confident it will happen."

Wilder's fellow American Jarrell Miller had been mentioned as another potential opponent for Joshua's American debut, but the enforcement of Povetkin's mandatory appears to have ruled out the New Yorker.