Bellew vs Usyk: Tony Bellew says he will have to retire after fighting Oleksandr Usyk

Tony Bellew is convinced he will beat Oleksandr Usyk, but believes he will then have to retire as "not the same man" due to the damage he would sustain.

Bellew's promoter Eddie Hearn and his counterpart Alexander Krassyuk are discussing terms for a cruiserweight fight that will have Usyk's four world titles on the line.

The Ukrainian's goal is to move up to heavyweight and face Anthony Joshua, but 'Bomber' has told Usyk a fight with him is anything but a stepping stone, although the British star believes that even if he wins, it will have to be his last fight.

"I will ask a load more questions of him than he can of me, because I've been through every single scenario you can imagine in a boxing ring," he exclusively told Sky Sports. 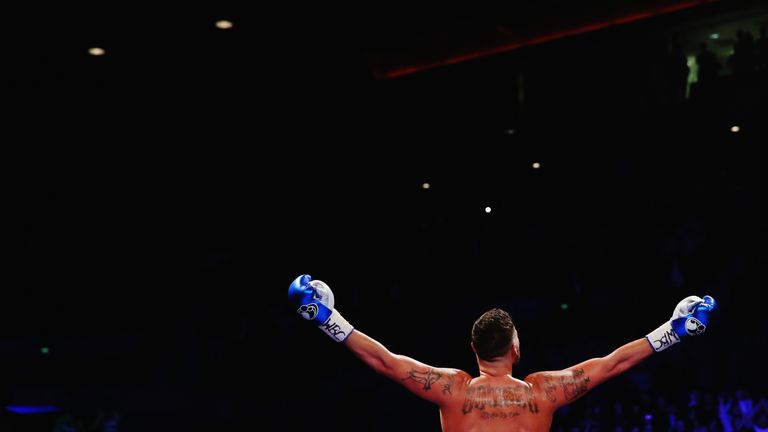 I understand exactly what I am getting into. It's a very hard, dangerous fight. I might not be the same man coming out of it but I can tell you, I will win.

"I've got so much respect for him. I sparred with him in the amateurs and he was a master then. He is my worst nightmare, a tall, rangy southpaw, with skills to burn and fantastic footwork.

"But I can tell you now, if I fight Oleksandr Usyk, it will be my last ever fight, because I will take some serious stick.

"If I fight Tyson Fury next, I could have another fight after that because I will beat Tyson Fury and it would be much easier than beating Usyk, without a shadow of a doubt. I understand exactly what I am getting into. It's a very hard, dangerous fight.

"I might not be the same man coming out of it, but I can tell you, I will win. I don't know how, I don't know when it will happen, but I know I will take him."

Tyson Fury says his team are talking to the WBC heavyweight champion, Deontay Wilder, about a December fight...

The 31-year-old has won Olympic, world and European amateur golds and has barely been troubled in 15 professional fights, but even if he has to move back down from heavyweight, Bellew believes he will be the first to beat the pound-for-pound contender.

"I want all those belts. I want the fight and I want all the marbles. There's no point doing it if there's nothing on it," Bellew said.

"I will be coming with a whole new set of tools for him to deal with, than Murat Gassiev or an old Marco Huck did. I know he doesn't think it or believe it, but I can iron him out. If I hit him with the same left that I hit David Haye and Makabu, he is going.

"Number one, I will be the first fighter he's ever fought who is hard to hit, and I mean really hard to nail clean. Number two, I am a fighter that when he's missing, he gets counter-punched by something heavy from me. He's hitting the floor.

"Does he know what to do when that happens, because I do. I've been down that many times, but has he?"