Beterbiev vs Johnson: Callum Johnson not fazed by fearsome reputation of Artur Beterbiev

Callum Johnson has branded Artur Beterbiev a 'beast', but insists his knockout power can topple the fearsome IBF light-heavyweight king.

The 32-year-old British and Commonwealth champion has seized the opportunity to challenge Beterbiev for the IBF belt on promoter Eddie Hearn's first US-based DAZN show in Chicago on October 6, live on Sky Sports.

Beterbiev is renowned as one of boxing's most dangerous punchers, winning all 12 fights by knockout, but Johnson intends to retain the all-action approach which has brought him 12 stoppages in an unbeaten 17-fight record.

"I think you'll just see the same Callum Johnson," he told Sky Sports. "I'm straight down to business. It doesn't matter who I'm fighting, I'm in there to try and do a job on them.

"I know this guy that I'm fighting is a beast and everything else and he'll be trying to do a job on me, so I think it's going to be an exciting fight. I think it will go off on bell one."

Johnson ripped the British belt from Frank Buglioni with a first-round knockout win and pointed to Sergey Kovalev's recent defeat as proof of how a fighter's daunting reputation can be quickly shattered. 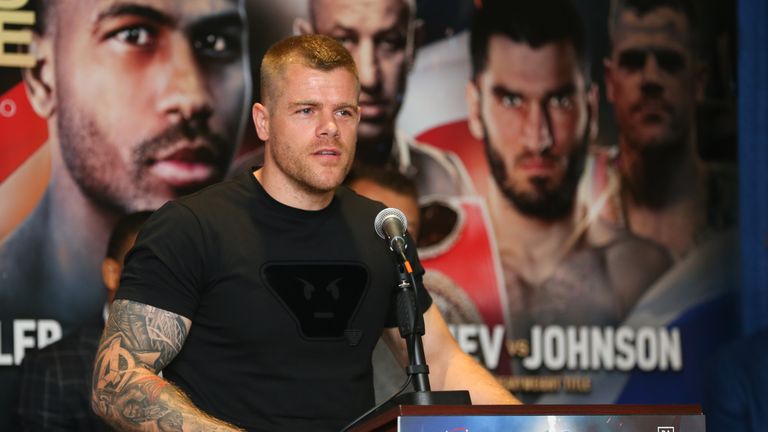 I've got the power to knock anybody out, so if I land on his chin clean, he's not going to stand up to it, because there's not anybody out there that can.

"I know what I'm up against. I'm a massive underdog, but Kovalev got beat last weekend," said Johnson.

"I know for a fact I've got the power to knock anybody out, so if I land on his chin clean, he's not going to stand up to it, because there's not anybody out there that can.

"Vice-versa, if he lands on my chin clean, I'm probably not going to stand up to it, but that's what makes it exciting. We're both strong, compact fighters and I'm sure we won't have to go looking for each other."

On the undercard, fellow Brit Gavin McDonnell will battle WBA super-bantamweight champion Daniel Roman, who defended his belt with a points win over previously unbeaten Moises Flores in June.

"Come October 6, I will be making the third defence of my world title and it won't be my last one," said Roman. "I wish my best to Gavin and it will be a great fight and a great night."

"Adamek made me kind of hungry when he called me a boy," said Miller. "He is a legend but when you fight a young stud like me, sometimes parents get their butt whipped. This young man is going to take it to pops.

"I'm not going to spend an extra round in that ring. AJ might be the best in England, but he isn't the best in America and that's the way I see it. Hard work, dedication, cheeseburgers, let's get it."