Joe Gallagher: 'Lomachenko wants to fight in the UK and Crolla brings 12,000-15,000 fans to the Manchester Arena'

The pound-for-pound supremo from Ukraine, Lomachenko, currently holds the WBA 'super' lightweight belt, a version of the title that was once Crolla's.

"There was a possibility the Lomachenko fight could have been made," Crolla's trainer Gallagher told Sky Sports.

Is Lomachenko your No1? 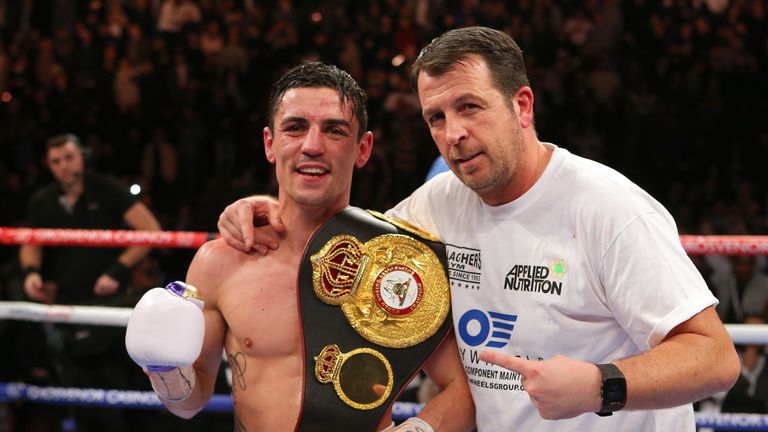 I had good people from inside Lomachenko's camp contact me, expressing an interest in coming to Manchester for a fight.

"I had good people from inside Lomachenko's camp contact me, expressing an interest in coming to Manchester for a fight, as they prepared for the unification with Ray Beltran.

"For whatever reason, it hasn't materialised."

"Somebody has to fight Lomachenko. He's searching for opponents," Gallagher said. "So why not Crolla?

"Lomachenko wants to fight in the UK and Crolla brings 12,000-15,000 fans to the Manchester Arena. That's the avenue we want to go down."

Crolla has rebounded from back-to-back losses to Jorge Linares, who Lomachenko defeated in his most recent fight.

Gallagher insists his stable of Manchester-based fighters have a history of seeking the most dangerous opposition.

"I got stick for suggesting Lomachenko for Crolla, but Callum Johnson is getting praise for fighting Artur Beterbiev," Gallagher said.

"We get criticised for losing the big fights sometimes, but my fighters want to test themselves against the best.

"Crolla, when he beat Ismael Barroso, could have sat on that belt and had numerous defences. But he wanted to test himself against Linares.

"Like Liam Smith against Saul 'Canelo' Alvarez, and Johnson against Beterbiev. They don't want to be kidded.

"Anthony was well up for it, it would have been the chance to share the ring with one of the best in the world.

"Anthony is very hungry. When fighters have been to the top, they want it again.

"It's no different to Ricky Hatton testing himself against the best, Floyd Mayweather. He lost but then gave it a go against Manny Pacquiao.

"We need a big fight for Anthony Crolla because he's the forgotten man of British boxing."