Joshua vs Povetkin: Anthony Joshua is focused on Alexander Povetkin and not Tyson Fury 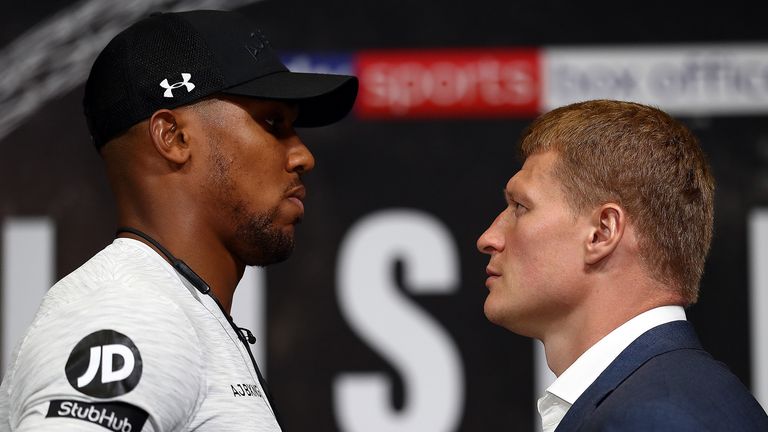 Anthony Joshua is viewing Alexander Povetkin as the 'biggest pressure fight of his career' and did not even watch Tyson Fury's recent win, says his promoter Eddie Hearn.

The unified world champion has paid little attention to his heavyweight rivals during another stringent training camp for his next title defence against WBA mandatory challenger Alexander Povetkin at Wembley Stadium on September 22, live on Sky Sports Box Office.

Negotiations for a unification fight against WBC champion Deontay Wilder have broken down, with the American instead attending Fury's points win over Francesco Pianeta to issue a challenge, but Joshua has shunned speculation about his own future plans as he prepares for Povetkin.

"His frame of mind is really, really focused," Hearn told Sky Sports. "I don't think he's taking a lot of interest in the outside world around this fight, because he knows what's at stake.

"Obviously people have told him he might be fighting [the winner of] Fury-Wilder, but he's just going to concentrate on what we're doing.

"If I was Povetkin, I would be loving what's happening. The normal man would say "How can AJ be in the right frame of mind right now to fight Povetkin, when all this is going on around him?" Everyone is talking about this, asking questions about this, it's very tough for him."

Wilder joined Fury in the ring to announce their intention to fight, with a date and venue to be announced, but Hearn revealed that Joshua was unaware of his British rival's victory in Belfast.

"It was later that night and I said 'The Fury fight?' He said 'No, what happened?'

Hearn says Joshua still wants to make the Wilder fight, but fears that talks cannot be salvaged, and Dillian Whyte has emerged as a frontrunner for the next bout, which must be agreed within a four-week time frame after the Povektin title defence.

"We've put a contract together based on all the terms that they agreed, and they still haven't even replied.

"If you don't like those terms anymore after you've accepted them, fine, let's talk about it and try and make it. They don't even want to talk about it. They wait on Fury-Wilder which I don't know, I have my doubts.

"We would like to make the Wilder fight now for April 13, but when you've got a group of people that won't reply to you, or wouldn't meet you to discuss it, how can you possibly make it?