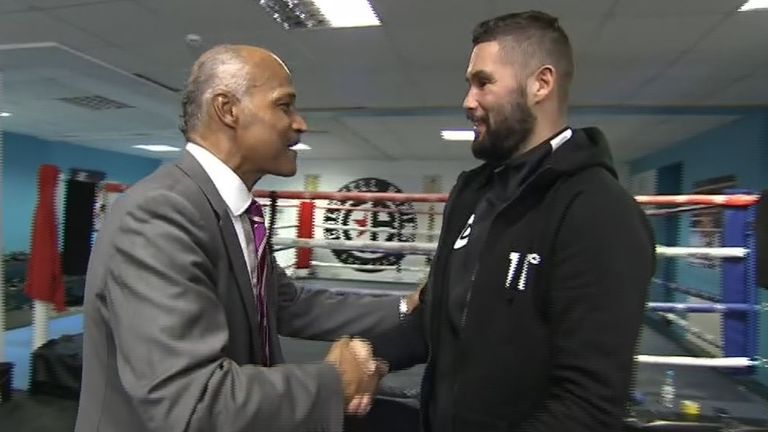 Tony Bellew gets advice from idol John Conteh, who believes 'Bomber' can make history this weekend

Tony Bellew gets advice from one of his childhood heroes, former world champion John Conteh, ahead of his fight against Oleksandr Usyk.

Bellew is chasing greatness as he challenges Usyk for all four cruiserweight world titles and undisputed supremacy this Saturday at a sold-out Manchester Arena, live on Sky Sports Box Office.

Long before 'Bomber' was flying the flag for boxing in Liverpool, John Conteh was the light-heavyweight champion of the world making an impression on the next generation.

"As a child I looked up to and idolised John, he's the greatest fighter our city has ever produced, by a country mile in my opinion," Bellew said when meeting Conteh ahead of Saturday's contest.

"No-one can ever do what John done and when he done it. When I was growing up John was the man.

"Scousers are hard people and I just believe we are different from others."

Both Bellew and Conteh were born in Toxteth, both have won a WBC world title and both have even tried their luck on the silver screen.

Watch the video above to see the two Merseysiders meet and hear what advice Conteh gives 'Bomber.'