Tony Bellew is promising "blood and pain" and has vowed to "break the heart" of Oleksandr Usyk in their undisputed world title fight.

Bellew challenges for Usyk's four cruiserweight belts at the Manchester Arena on Saturday, live on Sky Sports Box Office, and has vowed to topple the man he labels as "outstanding and exceptional who can do everything." 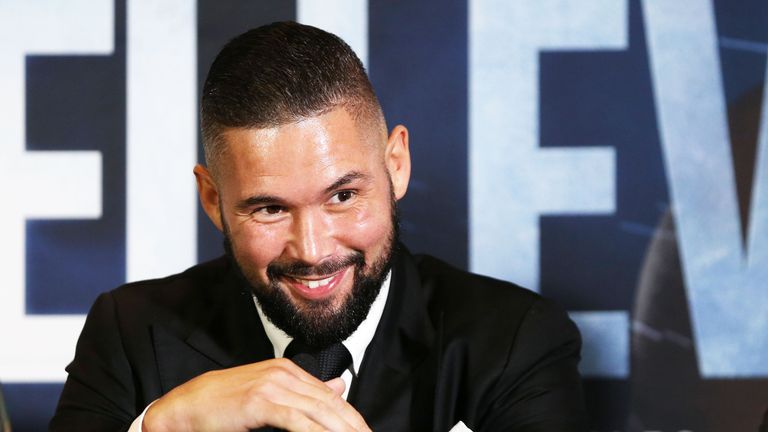 There'll be blood and pain and them four belts are coming home with me.

Speaking to Sky Sports after smashing the pads at Wednesday's public workout, the Liverpool heavy-hitter said: "I'm looking forward to Saturday, he [Usyk] is an exceptional champion and I'm so happy we've made the fight, this will be one of the best and most brutal fights you've ever seen.

"I'll punch him in the face. There'll be blood and pain and them four belts are coming home with me.

"I genuinely believe I will break his heart and find a way to get past him.

"Usyk is exceptional, brilliant and an elite fighter, he's done something no-one has ever done before and won everything possible from the amateurs to the pros."

"In every single defining fight I've been in, I've always been the underdog, it doesn't bother me. I don't feel any pressure. Nothing gets close to the pressure I felt ahead of my Goodison Park fight.

"The superstar [Usyk] is here, let him juggle the balls and do his crazy dances, there's no pressure on me."

Bellew admits that Saturday will likely be the last time he fights in a professional ring and he is determined to go out in a blaze of glory.

"I want a war, I want the fight beaten out of me," the Liverpool favourite continued.

"I need it going longer than four or five rounds, I don't need to carry on doing this anymore. I'll be very disappointed if I stop him in the first.

"I don't feel like I've ever been beaten up properly in my career and only have one genuine loss on my record, Adonis Stevenson is the only man to beat me fair and square.

"I'm at the back-end now and have been punched in the face for 20 years, I have a few more nights left."