Dillian Whyte has shrugged off the ringside presence of rivals such as Anthony Joshua as tonight's fight against Derek Chisora gets closer.

World heavyweight champion Joshua, Jarrell 'Big Baby' Miller and Oleksandr Usyk are expected at The O2 to watch Whyte reinforce his credentials in the crunch rematch with Chisora.

Whyte hopes that a second win against Chisora will land him a crack at Joshua's belts, with promoter Eddie Hearn saying earlier this week: "If [Joshua] can't fight Deontay Wilder or Tyson Fury, we look to the winner of [Whyte vs Chisora] and say: 'That's probably where our opponent will come from'."

Asked if he would welcome any post-fight interaction with Joshua on Saturday night, Whyte told Sky Sports: "I don't care. AJ can do what he wants. I've got my own thing to focus on. This is my night so I'm not bothered by who's at ringside, or what they're doing. 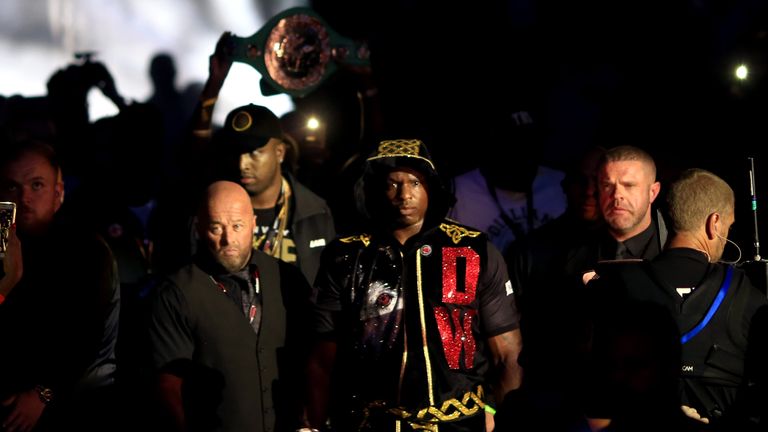 This is my night so I'm not bothered by who's at ringside, or what they're doing.

"I'm focused on one thing at a time."

Whyte was non-committal about challenging Joshua on April 13 at Wembley, saying: "I'm not thinking about that."

He is ranked No 1 by the WBO but the mandatory challenger for Joshua's title is not due to be confirmed until "the end of next year" according to Hearn.

Whyte explained: "We've been trying to become mandatory for a while. We've been doing our thing behind the scenes, so let's see."

Whyte's only career defeat came to Joshua three years ago and his old rival has backed Chisora for tonight's fight.

"I think Derek is going to whup Dillian. I want him to," Joshua said.

Whyte replied: "I bet he said it with a stupid smile on his face."

'Big Baby' Miller is another major presence at ringside tonight, and his relationship with Whyte was described as "not pleasant" by Hearn.

"I love the [Whyte vs Miller] fight because there's serious beef," Hearn said.

"I don't want Jarrell disrupting Dillian because I want Dillian to focus on Chisora. So I told Jarrell that - whether he listens or not is another story."