"It would be a pleasure to fight in a stadium like Wembley. At the moment the UK is the temple of boxing."

Carlos Takam wants to gain "revenge" on Derek Chisora and would love to take him on at Wembley Stadium.

The France-based heavyweight has always called for the chance to redress the balance after losing to Chisora in a seventh-round knockout in July.

Takam returned to winning ways on the undercard of Chisora's loss to Dillian Whyte in December and with trainer Don Charles confirming the Londoner will carry on, wants to face him again.

Chisora hurting but will fight on 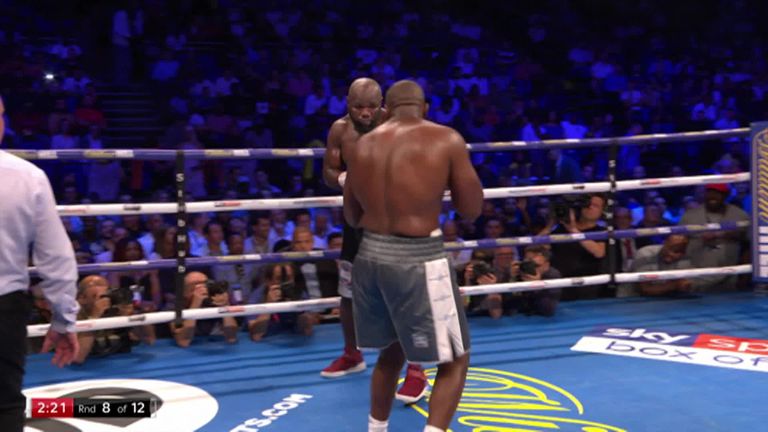 "With all the respect due to Derek, the first fight was an accident. It happens. As we say back home, sometimes even the snake can tumble.

"If I can fight Derek one more time, it won't be the same story. I will completely correct what happened.

"They put on a great show for the fans but we knew whatever happened, Dillian had more of a chance of winning than Chisora did.

"I have heard he prepared and trained very well for the rematch with Whyte and he is very disappointed losing it."

Takam's own seventh-round knockout of previously unbeaten Senad Gashi on the Whyte-Chisora bill saw him form a new bond with British fight fans.

His last three fights have taken place at The O2 (twice) and the Principality Stadium in Cardiff, where he took Anthony Joshua to 10 rounds, and would love to appear on 'AJ's scheduled April 13 bill, at Wembley Stadium.

"I will come back to London," said Takam. "It is always a pleasure because I love the London public. They have adopted me, so I feel at home when I come here.

"I am waiting for Eddie's phone call. If he does [call] we can talk about Wembley. You know I love to fight in the UK. I'd love to box at 'home' again.

"The Wembley Stadium events are internationally renowned and it's grandiose. It would be a pleasure to fight in a stadium like Wembley. At the moment the UK is the temple of boxing. The competition is between Europe and the rest of the world, but when we talk about heavyweight boxing, it is England where it's happening."

Takam admits he has matured since losing to Chisora and promoter Christian Cherchi would welcome the rematch.

"It makes sense, a rematch with Chisora, because the first one was a great fight," he said.

"We are working closely with Matchroom and even if Chisora is working with David Haye now, I am sure they would be interested in this one.

"Wembley Stadium would be perfect. Anthony Joshua is the only one who can do the main event there, so we will have to wait."