DeGale announced on social media that he is retiring from the sport on the 10-year anniversary of his boxing debut.

It follows a unanimous points decision loss to Chris Eubank Jr on Saturday night where the two-time world champion was floored twice.

The 33-year-old (25-3-1-KO15) was the first professional British boxer to win Olympic gold before going on to win a world title in the pro ranks.

He said: "Today marks ten years since my professional debut fight on 28th February 2009 and today is the day I am announcing my retirement from boxing.

"It's been an unbelievable journey and I've had an amazing decade - if I'm honest, the best years of my life.

"It hard to admit that I'm not the fighter I once was, but I'm human and along the way, my injuries have taken a toll - both on mind and body and these things have contributed to impact my performance in the ring.

"I lost the fight on Saturday at The O2 but I'm touched to have a good send off from the fans in my home city."

DeGale became Olympic champion at the Beijing Games in 2008 after beating Cuba's Emilio Correa in the final.

He turned professional the following year, and despite defeat early in his career to former gym mate George Groves, he went on to win the British, European and World titles in the super-middleweight division. 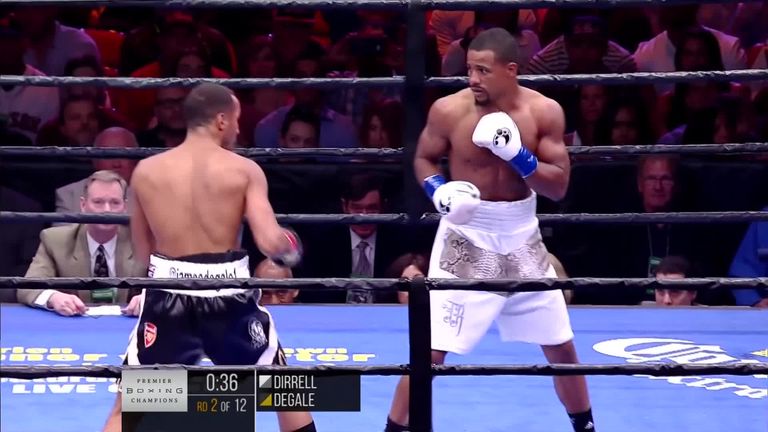 His old rival also took to social media to congratulate DeGale on his career. Groves won the pair's 2011 bout on a split points decision.

"I've given him a lot of stick the past week after his loss at the weekend but upon his decision to retire today I want to wish James DeGale well in the next chapter of his life," Groves tweeted.

"You've made the right decision. It's a tough sport and you reached the highest level. Congratulations."

Arguably DeGale's finest win came in Boston in May 2015 when he won the IBF world title against American Andre Dirrell.

He floored Dirrell twice in the second round before claiming a points decision to be crowned Britain's first Olympic gold medallist to win a world title as a pro.

He lost his IBF strap to American Caleb Truax in December 2017 but he won the belt back in a rematch a few months later.

DeGale fought twice more since becoming a two-time world champion but his final outing resulted in a career-ending defeat to Eubank Jr.