Chris Eubank Jr has been urged to commit to a long-term trainer by Nate Vasquez, who was in the corner for his standout victory over James DeGale.

Eubank Jr employed Vasquez as the first full-time trainer of his career prior to his most recent fight, and went on to floor DeGale twice in a points win, but they have not spoken since.

Vasquez found out through word-of-mouth that Eubank Jr is now training at Virgil Hunter's gym in California, which Andre Ward and Amir Khan have notably used.

"I got the best win of his career with him. I'm not mad at him if he goes to another trainer.

"I don't think Chris Jr will do a training camp in California without any of his people there. And I don't think Virgil Hunter will leave California.

"Chris wants to be a boxer but he needs a lot of work on his footwork, and his style isn't meant to be a boxer like Roy Jones Jr or Andre Ward. Some styles can't change and, if he changed, it wouldn't suit him.

"My main purpose was to work on his defence, his jab and to get him to throw combos. You don't want to change anybody too much. Chris is a pressure fighter and if you change him into a boxer it won't go well for him." 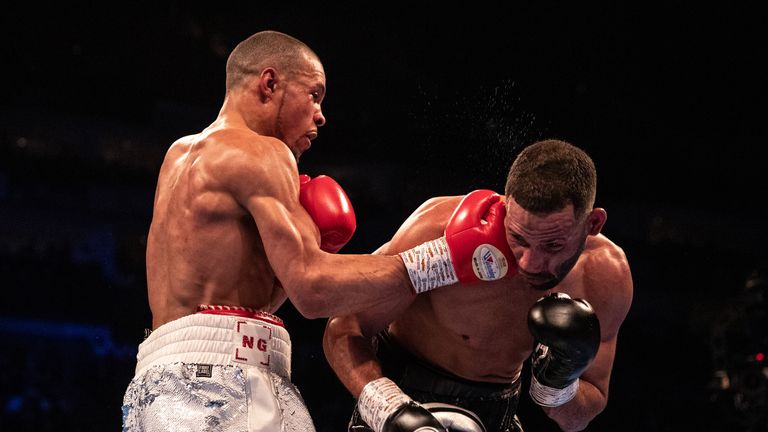 Chris is a pressure fighter and if you change him into a boxer it won't go well for him.

Eubank Jr was willing to listen and take advice on board, Vasquez explained, saying: "He listened to me. For the little amount of time that we worked together, he looked the best that he has ever looked.

"He was listening really well, in sparring too. He would come to the corner then go out and do what I said.

"I told Chris Jr at the weigh-in that DeGale's body was soft. I could see it."

Vasquez had a good relationship with Ronnie Davies, the former trainer of Chris Eubank Sr who now oversees Eubank Jr too. But Eubank Sr's absence from the training camp meant Vasquez had "no relationship" with his fighter's famous father.

"A couple of weeks before the fight, Ronnie told me that Senior would not be in the corner," Vasquez said. "I thought it was better for him to be outside the ring. But on the night he squeezed into the corner. He was trying to tell Chris Jr stuff but Chris Jr said, 'Quiet, I'm listening to Nate'."

Vasquez has not closed the door on working with Eubank Jr in the future and believes in his ability to become a world champion, saying: "He can but he's got to listen."