"There will be an announcement from us in the early part of next week, locking in Anthony Joshua's next opponent"

Anthony Joshua will receive confirmation of his world title challenger in the "early part of next week" with an America-based opponent viewed as the 'ideal' choice, says Eddie Hearn.

The unified world heavyweight champion will press ahead with his planned US debut at Madison Square Garden in New York on June 1, live on Sky Sports Box Office, after Jarrell Miller was refused a boxing licence following an adverse finding from a drug test.

Miller has protested his innocence and will await a B-sample, but promoter Hearn has drawn up a shortlist of alternative opponents for Joshua, and expects to make an announcement in the coming days.

"Obviously it's a fight in America, so from our point of view, we would like an American challenger really," Hearn told Sky Sports News. "I don't think it will be Dillian Whyte. 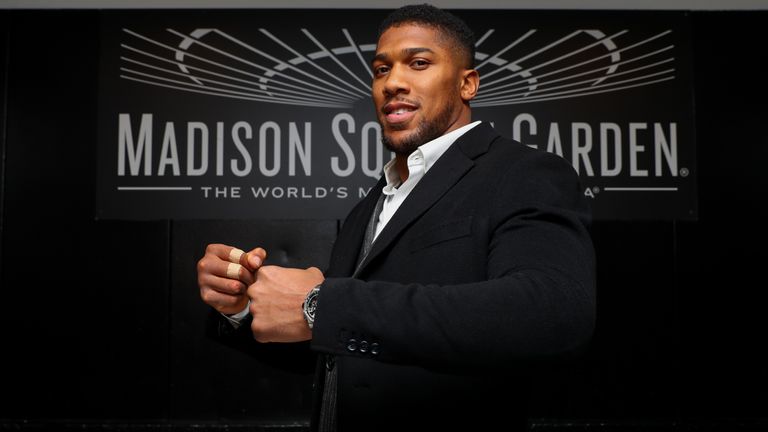 Eddie Hearns tells Sky Sports News that a new opponent for Joshua will be announced early next week, subject to the result of Miller's 'B' sample drug test

"There's probably seven or eight guys I think would fit the bill. Being an American debut, in an ideal world we would like it to be an American, or someone that fights in America.

"We're going through that and we're going to be working hard in the next couple of days. There will be an announcement from us in the early part of next week, locking in Anthony Joshua's next opponent."

Luis Ortiz, whose sole defeat came in an exciting battle with Deontay Wilder, was initially one of the preferred options, although Hearn is unsure if the Cuban will take the fight.

"Luis Ortiz was one of the first people that I spoke to actually, his manager, a guy called Jay Jimenez, who we've worked with before.

"He told me it was too short notice. I disagreed with him, but they are going to be speaking to their fighter. I think the Luis Ortiz fight is a great fight, he has been promised the Deontay Wilder fight as well, by his team, which is a bit worrying for us to hear that news.

"I'm not sure if Ortiz is going to be the guy. Like I said, everyone has been calling."

Watch David Allen against Lucas Browne on the O2 bill, including Derek Chisora vs Senad Gashi, Josh Kelly and Joe Cordina on Saturday, from 7pm on Sky Sports Action.