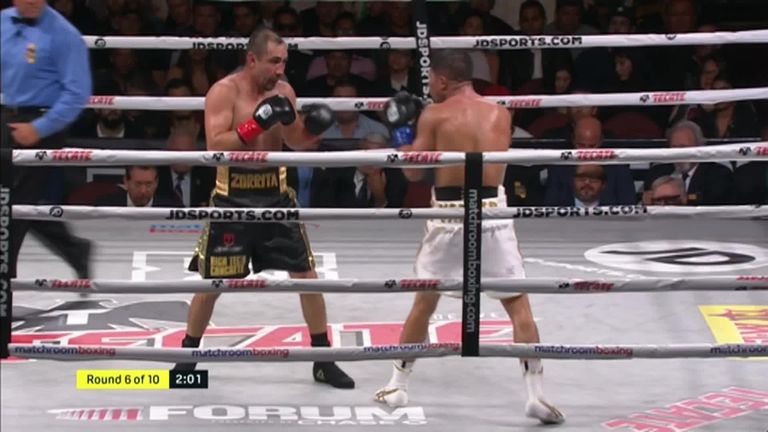 Jesse Vargas stopped Humberto Soto in the sixth round

Jessie Vargas ruthlessly stopped Humberto Soto in the sixth round as he prepared for a switch to super-welterweight.

The Californian is expected to step up from welterweight, with this fight set at a 151lbs catchweight, and he overcame an early cut to produce an impressive stoppage of Mexican veteran Soto in Los Angeles.

Aggressive tactics were employed by Soto in the opening round as he unloaded a cluster of punches, only to be briefly stalled by a low blow from Vargas.

A head clash opened a cut over the left eye of Vargas in the second round, but he still managed to counter with a crisp left hook.

Guided by Freddie Roach, his new trainer, Vargas shrugged off the effects of the injury to deliver crunching body shots in the third, while both fighters traded flurries of punches during a lively fourth, with Soto refusing to give ground.

Vargas was being made to work, despite Soto's advancing years, and they exchanged combinations in the closing seconds of the fifth.

But Soto unravelled in the sixth, toppling to the canvas after a left hook, and when he clambered to his feet Vargas piled on the punches to force the intervention of the referee.