"It's not just about [Khan]. There are other top fighters who actually want to fight." 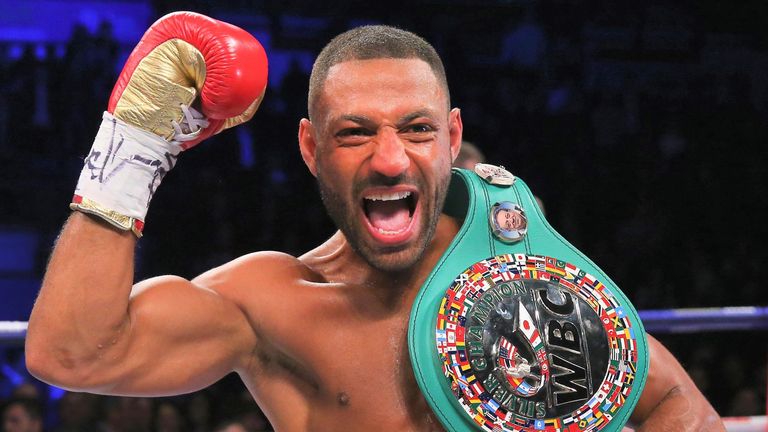 Kell Brook insists that fighting his elusive rival Amir Khan would be part of his dream year, but is prioritising a world title assault.

Former welterweight world champion Brook returns against Mark DeLuca in his home city of Sheffield on February 8, live on Sky Sports, aiming to build towards a super-welterweight title fight.

The champions in his new division at 154lbs are Julian Williams (IBF and WBA), Jermell Charlo (WBC) and Patrick Teixeira (WBO).

Brook told Sky Sports that he would prefer to challenge one of those world champions than face Khan: "Yes, I would. I want to be a two-time world champion. To prove all the doubters wrong and lift a belt above my head again.

"It's not just about [Khan]. There are other top fighters who actually want to fight."

But Brook admitted he does not expect to be contacted by Khan if he delivers an explosive performance on his comeback next month.

He added about the long-anticipated all-British clash: "It could still be there. He needs to contact me. I'm fed up of saying his name!

"He knows where I am. He knows how to contact me."

Brook's attention will be on becoming a two-weight world champion in 2020 by challenging Williams, Charlo or Teixeira.

"Those names excite me, I am smiling," he said. "They have got the belts, and I want them. I want to be a two-time world champion.

"It's about a world title fight. I'm not looking past DeLuca but I will take care of him.

"I want the big fights, the big names. I have no time to rest. I want it.

"People are writing me off. My last fight wasn't fantastic. I've got a lot to prove. All those who think I'm past it? I'll show them."

Brook explained that he could still "make welterweight for the right fight" - but only if he had the opportunity to face WBO champion Terence Crawford or his former conqueror Errol Spence Jr, who holds IBF and WBC gold.

"They do need to fight," Brook said about Crawford and Spence Jr. "Arguably they are No 1 and No 2. I always thought Spence Jr would beat him but he had a car crash, his weight has been heavy, and Crawford has been looking good. Crawford has been active more. I'm favouring Team Bud now."

But after more than a year outside the ring, Brook's immediate task is to impressively dispatch his upcoming opponent DeLuca.

"I've dusted off the cobwebs," he said. "I tried to make big fights in 2019 but they fell through so I regrouped, refreshed.

"I've got the mojo back now. I'm excited to fight in the Steel City of Sheffield. I can't wait to perform again.

"[DeLuca] is a very tough man. He used to be a Marine. An American guy who has only had one defeat, then in his next fight he came back to beat the same guy. He is basically unbeaten.

"He is tough and determined and will come to fight so the fans are in for a real treat."