Chasing a fight with Tyson Fury became a destructive pursuit for David Price who reveals to Sky Sports why he was denied a British heavyweight battle.

Fury is fast approaching a huge rematch with Deontay Wilder, but eight years ago, his bitter, bad-tempered domestic rivalry with Price was at its peak.

"It was like the biggest thing in British boxing at the time and it vanished in the end," recalled the Liverpudlian.

Price, with towering height, telescopic reach and thudding power, had the attributes to succeed in the hostile heavyweight arena, along with an Olympic bronze medal and Commonwealth gold to underline his pedigree.

The pro career of Fury started with less fanfare. He had endured an amateur defeat to Price, despite delivering an eye-catching knockdown, and ultimately missed out on Olympic qualification.

A controversial points victory over John McDermott did little to improve early assessments of Fury, whose struggle at English title level was not befitting of a name that called for big and bold headlines.

Price seemed to be elbowing Fury onto the small print as he captured the focus of the cameras with explosive early victories, although both would soon become embroiled in an ugly feud.

The decision to accept a British and Commonwealth title fight with Derek Chisora had appeared hasty by Fury, but he widely outpointed the fellow unbeaten prospect to capture both belts.

Price had demolished McDermott to become mandatory challenger for the titles, setting up an enticing showdown, but Fury relinquished his crowns to pursue a different path.

"By vacating the belts against me, he stepped back under [former trainer] Peter Fury and said let's work on what we've been doing. It proved to be a great decision," admitted Price.

"It went to purse bids, and they pulled out of the purse bids at the 11th hour. We kind of expected it, but we used it as a bit of a PR thing to say you'd ducked me and this and that."

Backed by different promoters, Price and Fury went stride for stride in a sprint to become the leading homegrown heavyweight, but one would tumble as they climbed steeper up the rankings.

Fury stepped above the domestic scene to defeat Kevin Johnson, a former world title opponent for Vitali Klitschko. Price then attempted to follow with a win over Tony Thompson, who was still stinging from a recent loss to Vitali's brother Wladimir.

"The Tony Thompson fight was the wrong fight for me to take at that time, but we were in a mad rush," said Price. 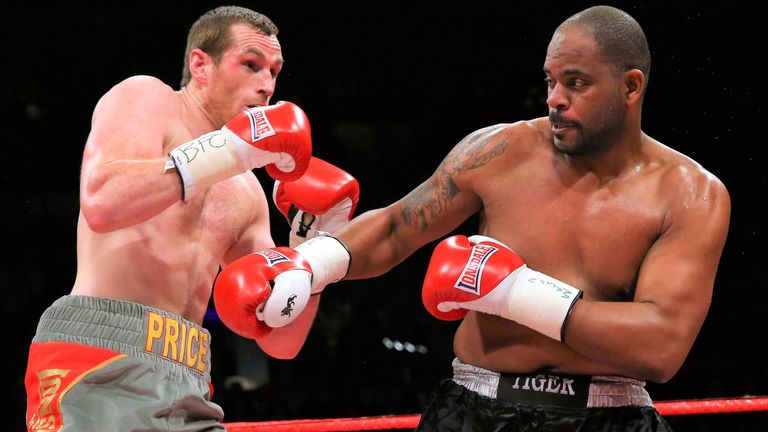 A big, slippery southpaw, but it's in the history books now.

"It was like we were in a race with Mick Hennessy and Tyson Fury versus Frank Maloney and David Price. It was like trying to get the one up on each other every time.

"Tyson Fury had not long fought Kevin Johnson, who was like a slick American, old school type, who gave him rounds. All of a sudden, we get Tony Thompson in. The reality of it was that Tony Thompson's last fight was a title challenge against Wladimir Klitschko.

"A big, slippery southpaw, but it's in the history books now."

Price, eager to enhance his destructive record, went in search of a swift victory, but Thompson withstood the early onslaught to stun and stop the Merseysider with a cuffing right hand in the second round.

A rematch was hastily arranged in a bid to restore Price's reputation, but after flooring Thompson, his stamina seeped away and he was halted once again.

Price's time as a pacemaker for Fury had ended. Any thoughts of a fight were over.

In just a few weeks, Fury and Wilder will seize the attention of the boxing world, with fellow heavyweights and fans awaiting the outcome of a rematch between the enigmatic Brit and the destructive WBC champion.

Price will simply be an interested spectator and has long set aside any regrets or resentment about Fury.

"That's the thing. When you accept that you're not at the level of fighters you were once told you were going to be competing against, you can take a step back and look at them as a fan.

"You can admire them then, instead of seeing them as a rival. You can appreciate them for what they are - and that's what I can do now with Tyson Fury, Deontay Wilder, Anthony Joshua.

"The top names. I can look at them now and not think of them as a potential rival. I can go 'wow, how good are they.' It's not a bad thing."