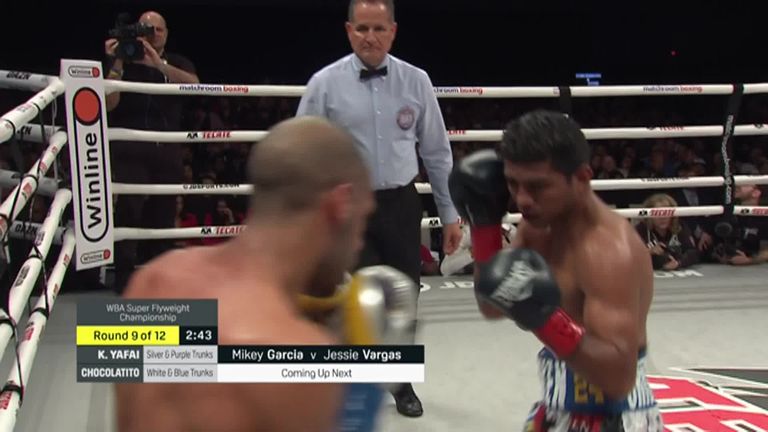 Kal Yafai suffered a crushing knockout loss to Roman 'Chocolatito' Gonzalez to rip the WBA super-flyweight title from the British fighter in Texas.

The Birmingham man had called for a clash against the four-weight world champion, but unwisely became embroiled in a punishing battle with Gonzalez, who floored Yafai in the eighth round before ending the fight with a huge right hand in the ninth.

Yafai's superior natural size was evident in the opening round, but Gonzalez was immediately willing to stand and trade shots from head to body.

In the second round, Yafai continued to be drawn into early exchanges with Gonzalez, who relished the opportunity to deliver clusters of punches at close quarters.

A few jolting jabs followed by a crisp right hand proved Yafai's prowess from a longer range in the third, but Gonzalez soon lured him in to deliver his classy combinations.

The wily ring general was gradually stepping up his assault, troubling Yafai with a fierce flurry in the fourth, while Gonzalez dug in jolting uppercuts in the fifth.

A head clash opened a cut over the right eye of Gonzalez, who was forced back by the fired-up Yafai, only to respond with crisp, precise punches in the sixth.

Yafai's status as Britain's longest-reigning champion was in peril and he was stunned by a string of hooks in the seventh, a sign of the destructive finish that Gonzalez was searching for.

A straight right hand stiffened the legs of Yafai in the eighth and another short right hand sent him slumping to the canvas in the closing seconds of the round.

But there was no respite as Gonzalez uncorked a huge right hand to drop Yafai heavily in the ninth and the referee spared him further punishment.