"I would love to get a potential fight with Manny Pacquiao, or a rematch with Errol Spence."

Mikey Garcia defeated Jessie Vargas by unanimous decision and then called for a super fight with Manny Pacquiao or a rematch with Errol Spence Jr.

The four-weight world champion stayed at welterweight, despite his first professional defeat to Errol Spence Jr, and dropped Vargas in the fifth round on the way to a points win with scores of 114-113, 116-111 and 116-111.

Speaking afterwards, Garcia insisted he wanted to stay at 147lbs and welcomed a fight with Pacquiao or Spence Jr. 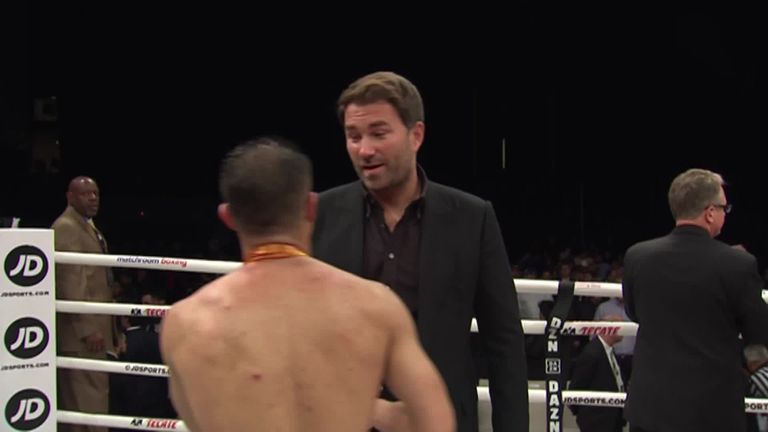 Garcia showed his class in unanimous decision win over Vargas

"I'm ready to get back in with the best," he said. "I would love to get a potential fight with Manny Pacquiao, or a rematch with Errol Spence. I think it would be a tremendous fight.

Asked about Pacquiao, Garcia said: "I think it's very likely that we are considered as likely opponents."

In the opening round, Vargas was quick to show his intent, sending an early left hook through the high guard of the tentative Garcia.

The Las Vegas man set a lively pace in the second round as he followed swift jabs with probing right hands.

But Garcia soon began to find his range, ripping in a right hand in the third, while the Californian seemed to have the edge in power as both men traded at close range in the fourth.

Bleeding from the nose, Vargas suddenly realised the painful task ahead, and Garcia dumped him to the canvas with a crunching right hand in the fifth.

Stalking for more openings, Garcia continued to punish Vargas with precise punches in the sixth.

A sustained attack from Garcia forced the referee to watch with concern at the end of the seventh, although Vargas did reply with a defiant right hand in the eighth.

But Garcia remained dominant, ramming in yet another hurtful right hand in the ninth, while Vargas was on unsteady legs after being caught by a ferocious flurry of punches in the 10th.

Displaying his bravery, Vargas withstood thudding shots in the 11th to deliver a few of his own, and both fighters ended an entertaining encounter by trading clean shots until the final bell.