"He may be the undisputed cruiserweight champion but on May 23rd he will find out what it feels like to be hit by a real heavyweight."

Oleksandr Usyk is back in Britain for a massive heavyweight battle against Derek Chisora at The O2 on May 23, live on Sky Sports Box Office.

The Ukrainian pound-for-pound star is the WBO mandatory challenger for unified champion Anthony Joshua but is risking plans for a world title fight by facing Chisora in only his second bout in the top division.

On Usyk's last visit to these shores in November 2018, he stopped Tony Bellew in explosive style to defend his four cruiserweight belts, and has since stepped up a division, halting Chazz Witherspoon on his heavyweight debut in October. 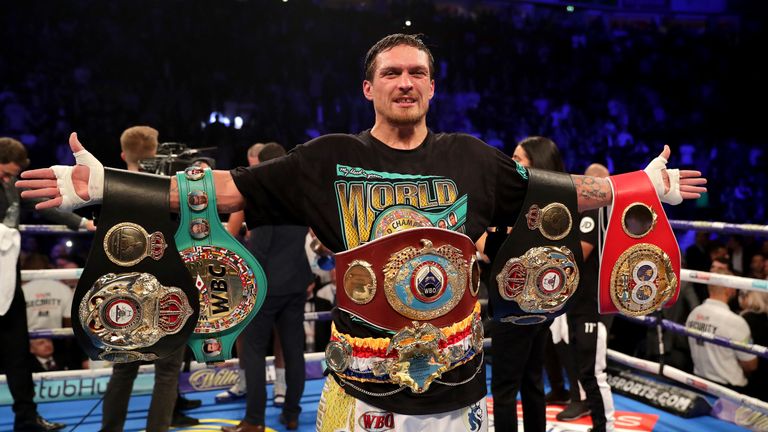 As a cruiserweight, I reached the highest heights as undisputed champion and now I am following the same path as a heavyweight.

"Boxing in Manchester in 2018 was an amazing experience, now I get to do it in London at the famous O2 Arena and I can't wait to fight in front of the British fans once again," said Usyk.

"As a cruiserweight, I reached the highest heights as undisputed champion and now I am following the same path as a heavyweight.

"I expect a real test in Chisora - he is strong, tough and resilient. I recall being an amateur and watching his fight with Vitali Klitschko. It seemed so big and far away.

"Now I am myself taking a fight against Chisora. I am working hard in my training camp to show a spectacular performance on May 23rd. Dear friends, I will see you soon!"

Chisora has vowed to give Usyk a painful introduction to life in the top division as the Londoner with the 'WAR' nickname returns to his favourite venue, the scene of destructive victories over Carlos Takam, Artur Szpilka and David Price.

"WAR is coming," said Chisora. "Usyk reckons he can step up and survive with the big boys. He may be the undisputed cruiserweight champion of the world but on May 23rd he will find out what it feels like to be hit by a real heavyweight.

"He is coming to my backyard, I'm going to remind him exactly why he hid in the cruiserweight division and also get revenge for my boy, Tony Bellew. This will be WAR."

Manager David Haye, who has guided Chisora's impressive resurgence, said: "This barnstormer fight against Usyk, the mandatory Challenger for AJ's WBO World title, has been talked about for more than six months.

"WAR Chisora had been written off by all the experts. In reality a couple of years ago people believed his career to be over and many still consider Chisora's chances of victory on May 23rd as minute, and who can blame them?

"Derek is a fighter with nine losses on his professional record, who will be stepping in a ring with a former undisputed cruiserweight world champion and 2012 Olympic Gold medallist. Usyk is a fighter found in everyone's top five pound for pound list.

"On paper it's a mission impossible, but in reality, WAR Chisora is preparing to bring something Usyk has never seen before, an intensity from a rock solid 119kg wrecking machine, who will bulldoze his way to a victory in his hometown." 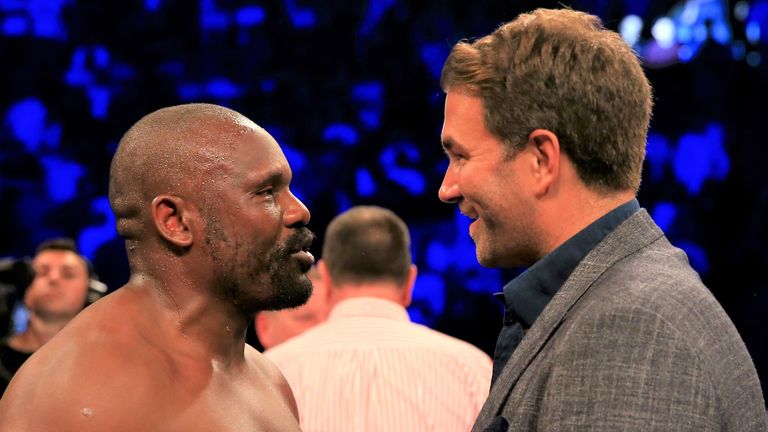 This has the potential to be one of the great O2 nights - a heavyweight blockbuster that can only be full of drama.

Matchroom Boxing promoter Eddie Hearn said: "This has the potential to be one of the great O2 nights - a heavyweight blockbuster that can only be full of drama.

"Usyk, who has become a UK fans favourite in his own right, did it all at cruiserweight, becoming undisputed world champion in just 15 fights.

"Now he attempts the same feat in the glamour division, with the big boys. Has he bitten off more than he can chew with Del Boy, who has consistently proved the doubters wrong and become one of the toughest, explosive heavyweights in the game? Anything can happen on May 23, drop everything and don't miss it!"

"Oleksandr Usyk against Derek Chisora has all the ingredients for a classic heavyweight clash," said Adam Smith, Sky Sports' Head of Boxing Development.

"Can the supremely talented Ukrainian withstand Chisora's relentless aggression on a red-hot night at The O2? I've spoken to Chisora's manager David Haye who is massively confident that his fighter will topple the former undisputed cruiserweight king.

"We know all about Usyk's class, having witnessed his dramatic battle with Tony Bellew at Manchester Arena - and a certain Anthony Joshua will be keeping a close eye on a potential foe for the future.

"We've got a real heavyweight line-up in the coming weeks, with Dillian Whyte's explosive encounter against Alexander Povetkin, Usyk's risky showdown with Chisora and then AJ takes centre stage for his huge World Title fight against Kubrat Pulev."