Helenius: "The Vikings have been there many times before"

Robert Helenius is one win away from a world-title clash and 'The Nordic Nightmare' plans to rip away Anthony Joshua's belts on a 'Viking invasion' to Britain.

The former European heavyweight champion shattered the unbeaten record of Adam Kownacki in last month's WBA eliminator, demolishing the New York-based Pole inside four rounds to line up a shot at Joshua, who holds the WBA 'super', IBF and WBO belts.

Helenius admits he was stunned by Joshua's first professional defeat to Andy Ruiz Jr, which was swiftly avenged by Britain's unified champion in a December rematch, and the formidable 6ft 6in fighter believes he will take the world titles back to Scandinavia.

"I was very surprised that he got knocked down [by Andy Ruiz Jr]. He made mistakes, but he did well in the second fight.

"Ruiz and me are very different fighters. We are the same height, Anthony and me. I've been there in a sparring camp with him. I have nothing personal against him, he's a very good guy. I think very highly of him and I like him a lot, but I think I would beat him."

Asked if he would come to the UK, Helenius said: "Of course, the Vikings have been there many times before.

"Yes, that is exactly what I'm planning to do (a Viking invasion)."

Tyson Fury has also traded punches in sparring with Helenius, who says the newly crowned WBC title holder would pose different challenges to Joshua, but wants to prove himself as superior to either champion.

"I've been also at Tyson Fury camps, sparring with him. It's a whole different fight and I would not reveal his secrets, how I would go about the fight. It's also a very interesting fight."

Having overcome a string of injuries and illness in recent years, Helenius must now wait for confirmation of a possible WBA final eliminator.

The fully-fit 36-year-old, who holds a points win over Derek Chisora, insists he is not concerned about the identity of an opponent, with the likes of Luis Ortiz and Ruiz Jr sitting above him in the WBA rankings. 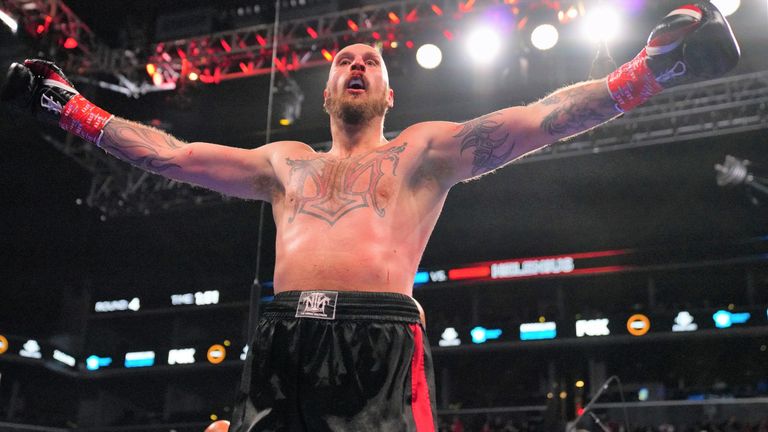 I don't really care who I'm fighting next, so I'm going to be ready for whoever comes in my way

"This win was especially important of course, because it was a WBA eliminator fight," said Helenius.

"I think it's because I've been training injury-free for a couple of years now. I had a lot of problems after my shoulder injury and shoulder operation. Dealing with a lot of problems with hand operations and stuff like that. I was sick, I had a lung disease, and I think I'm bouncing back.

"I hope I will get the biggest fight. I don't really care who I'm fighting next, so I'm going to be ready for whoever comes in my way."