"He is the perfect example for the phrase: 'Don't judge a book by its cover'"

Nikolai Valuev’s enormous body was once crammed into the back of a car, with heavy metal and rap music being blared out, much to his disgust.

His next ring-walk music was being pitched to him by promoters keen to pair 'The Beast From The East' with a fearsome tune that matched his reputation. Valuev, with his knees crammed into the back seat, removed his earphones and dismissed every option. He had been listening to Beethoven's Fifth Symphony.

This was the burden that Valuev carried on his massive shoulders. The largest-ever heavyweight champion stood seven-feet tall and is best remembered for being called "a circus freak show" and "big, hairy and ugly" by David Haye prior to their fight in which Valuev weighed-in a whopping eight stone heavier than his opponent. He never escaped the perception that he was an ogre but, deep down, Valuev is described as a gentle giant and a philosophical thinker by those who knew him best, who hope his true purpose may be in his current guise as a politician. 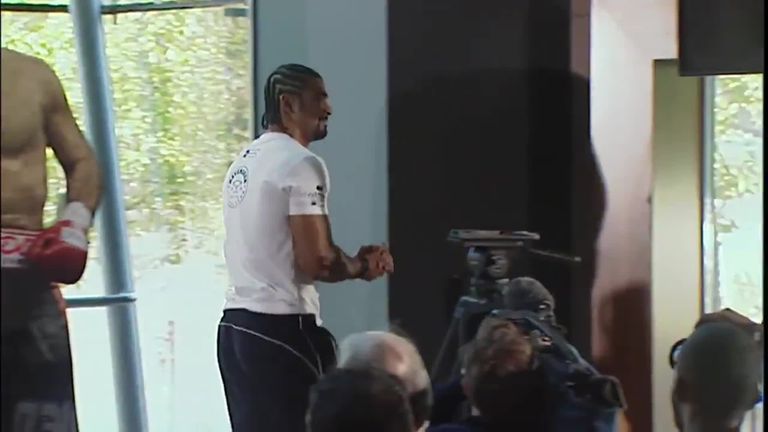 Valuev loses his head! Haye was less than impressed when Valuev was a no-show at their press conference...

There are other stories of the Russian monster whose personality never fit his exterior.

Late for his UK debut at Battersea Town Hall, event organisers were panicked by how they could possibly misplace someone so big. Finally they made contact with him, just a couple of hours before his fight, and found that Valuev was on Baker Street at the Sherlock Holmes museum. He was an enthusiast for classics by Arthur Conan Doyle and Agatha Christie, they discovered.

Valuev's parents were just 5ft5in tall, so they say, and his grandmother believes his physique descends from an ancient tribe called the Tartars known for being oversized warriors. Such mythology was music to the ears of Kellie Maloney (then known as Frank Maloney), the London promoter who loved few things more than a novelty heavyweight.

Valuev was being touted around the globe and would fight in Australia, Japan, Korea and eventually the Trump Taj Mahal in Atlantic City where you-know-who took an interest. But his fifth and sixth fights were in London promoted by Maloney.

"I needed publicity for him," Maloney told Sky Sports. "I phoned the local press and brought them to the hotel. I told them that Valuev couldn't fit in the bath or the bed."

"I dressed him up as the Russian guy from the Rocky films.

"I saw a novelty value in Valuev. I didn't think he was very good. You could have made films with him. He was a promoter's dream. I thought: 'I'll make him a national hero, I'll go to Russia and be treated like royalty!'

"I fell in love with the guy. I had heavyweights like Lennox Lewis and Julius Francis but this guy was the monster of monsters!

"He didn't eat as much as I expected him to eat."

Maloney, insisting Valuev exceeded 7ft tall, coined the nickname 'The Beast From The East' but any hopes for longevity with this project were thwarted by an ominous phone call.

"I had a deal with Valuev's agent and a really nice guy associated with the Russian federation," Maloney explained. "When they heard about the publicity he was getting, his agent mysteriously got ill. He was taken into hospital so our contract never got made.

"I got a phone call in a Russian accent saying: 'Forget about The Beast From The East'.

"The agent that we had been dealing with told me to be careful.

"A few days later the agent died in hospital.

"At that point I just left it. I didn't pursue it."

Despite the dark undertones associated with him, Valuev's true personality shone through.

"He was a very respectful man who always thanked us," Maloney remembered. "He always spoke about his love for his family."

Too easily forgotten is that the Valuev mystique was able to build because he was winning fights.

"He had fought around the world and not been taken seriously because his size overshadowed everything else," promoter Kalle Sauerland, whose father began working with Valuev, told Sky Sports.

"We promoted him from being a circus act to the first-ever Russian heavyweight champion.

"There are lots of big guys. Put Anthony Joshua, Tyson Fury and Deontay Wilder together and you get Valuev! He's ginormous.

"He worked very well off his jab. If he got his jab going it became physically impossible for you, even for other big fighters.

"He adapted his style around his size but he didn't rely on it. People expected him to be a huge puncher. But the time it took to throw a punch from one size of his body to the other? It was like sending an email to his opponent! His size was an advantage but also a disadvantage - he worked around it and put a lot of hours in that."

Sauerland once boarded a 5am flight out of Moscow and found Valuev asleep laying across every seat in the front row, still needing to curl up to fit.

"I felt for the people who had to sit in the first row," Sauerland laughed. "You definitely wouldn't fancy asking him to move!"

Legendary American promoter Don King got involved alongside the Sauerlands and, to hype Valuev's fights in the US, labelled him "the eight wonder of the world".

The big Russian never wanted to be gawped at.

"I want to win the hearts of the American people," he said. "I want them to welcome me not for my size, but for my boxing skill."

His world heavyweight title defence against David Haye was dubbed, you guessed it, David vs Goliath.

"I have watched The Lord Of The Rings and other films with strange-looking people, but for a human being to look like Valuev - it's pretty shocking," Haye taunted.

"The one thing I'm not looking forward to is getting into clinches with him, because he's so hairy. It's disgusting!"

Haye won the fight in Germany to become a heavyweight champion for the first time and later said: "It's easy to rewrite history, but very few were backing me to beat 'The Beast from the East' at the time."

Valuev retired three days after losing to Haye. Perhaps the only regret was never fighting either of the Klitschkos.

Were there talks? Kalle Sauerland said: "Lots with Vitali. But never with Wladimir - he didn't fancy it. We were once very, very close to a deal with Vitali but Don King was involved and that's where it ended."

Larry Donald fought both Valuev and Vitali Klitschko and told Sky Sports that the latter would have won. He also claimed Valuev had little skill, just overwhelming size.

Valuev, a heartfelt soul outside of the ring, was quoted in the book The Greatest Sport of All: An Inside-Look at Another Year in Boxing: "I am not a machine. I am not a piece of meat. I am not a circus show.

"I am a normal human being. I have human feelings. I have a beautiful family. I have many friends. I like good music, classical music. I read books. People sometimes do not treat me like a human being because of my size. They make a sensation. I try not to take it personally because they do not know me as a person.

"But there are times when it hurts me inside."

The chess lover who wooed his 5ft2in wife by writing her poetry became an actor, including a lead role in a film about a boxer, and then bizarrely a children's TV presenter on a famous Russian show which is equivalent to Tyson Fury getting the top job on CBeebies.

Valuev is now a politician and a recognisable face in the Kremlin where he has a specialised seat to fit in. The book All the Kremlin's Men: Inside the Court of Vladimir Putin said he "stood out from the crowd by virtue he was attired in grey (and also happened to be a gigantic former professional boxer)".

Last year he revealed having brain surgery but has resumed his politics career.

"People look at him and see a big lump but he is extremely intelligent," Kalle Sauerland said. "He's one of the cleverest fighters I've ever met.

"He is the perfect example for the phrase: 'Don't judge a book by its cover'.

"He really was a gentle giant."