"Wladimir said to me, 'Michael, if you beat Audley, you'll get a shot at my world titles'"

Lifetimes and boxing careers can hinge on key moments - and heavyweight Michael Sprott knows that all too well.

The 45-year-old, a two-time European champion, boasts a fine 71-fight CV that is just missing a world title challenge.

But Sprott told Sky Sports he was just seconds away from securing one.

On April 9, 2010, as he prepared in the bowels of Wembley Arena for his European title tussle with old friend Audley Harrison, he was handed a mobile phone. On the line was IBF and WBO Champion, Wladimir Klitschko.

"Wladimir said to me, 'Michael, if you beat Audley, you'll get a shot at my world titles.'

For a long time, it looked as if Sprott was going to become a three-time European champion and secure the holy grail of a world title shot. With Harrison injured and effectively one-handed, the Reading man was up on all scorecards going into the final round.

"I should have danced around in that final round, spat my gum shield out, wasted time. But at the time, my trainer Jim Evans told me 'go out and put in on him'," Sprott remembered with no hint of resentment.

For the first minute of the final round, he pinned the taller man on the ropes. He looked on track to replicating the stoppage victory he had registered over Harrison in 2007. But summoning a final burst of energy, the former Olympic champion spun off the ropes and Sprott ended up in the corner.

"He (Harrison) knew he was losing. He had to find it from somewhere. The problem was I threw a shot when he threw his left…"

Was this the best punch of Audley Harrison’s career? 🔥💪 pic.twitter.com/F8iLSvMHkX

Sprott was left sprawled on the canvas. Harrison went onto challenge David Haye for the WBA belt - and lost. Haye then lost a unification showdown with Wladimir Klitschko.

Sprott reported to the Klitschko training base for sparring in Austria shortly after his heartbreaking defeat:

"Wladimir came up to me and shook my hand and said he was sorry and that I'd boxed 'really, really, well' and had just been unlucky."

Despite the spectre of what could have been, Sprott says he enjoys talking about his career and you do not envisage a regretful retirement. Not that he's retired. He's not boxed for two years, but he's hoping to get a final "W" to add a happier bottom line to his record. Seven consecutive losses have left him with a tally of 42-29.

Even if Sprott did not test himself at the highest level, he still fought three men who held world titles, including two who knocked out Wladimir Klitschko. First came Corrie Sanders (former WBO champ) at the end of 2001.

"I flew out to Johannesburg a month before the fight to acclimatise. The first few days were mad. I went on a run, but ended up sprinting back to the hotel after just a few minutes as I was being chased by pit bulls!" he recalled, laughing.

"At the gym, I could see men and teenagers unloading guns. They used to have all the windows closed. It was like a sauna."

As Sprott conditioned himself to altitude and heat, his confidence was bolstered by reports of Sanders' fitness.

"They said he wasn't training hard, always playing golf. But he looked in great shape at the press conference, like the guy who fought Wladimir Klitschko (in 2003). The night before the fight, a South African man told me I'd get knocked out in the first round, I just laughed it off."

But the stranger proved prophetic as that's how it went.

"He threw a hook to my body, I'd never felt power like it! Then I managed to hurt him, but that was probably the worst thing I could do. He came back with a combination and I went over. I beat the count, but the ref waved it off. I was upset, but he probably saved me!"

Lamon Brewster stopped Wladimir Klitschko inside five rounds in 2004, so Sprott's loss by unanimous decision to the American in 2009 looks respectable.

"He (Brewster) was as wide as he was tall. I remember some guy was making chicken noises after he knocked me down. I came back after getting knocked down, but it was too late. He was a really nice guy though."

The third world champion on Sprott's record was then-hot-prospect Anthony Joshua in November 2014. 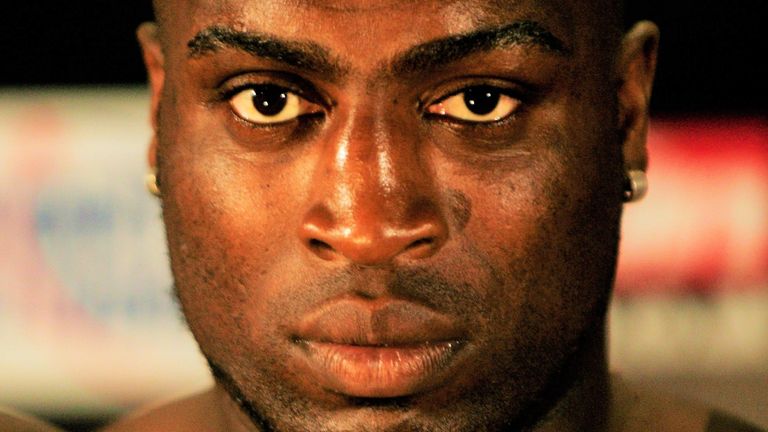 Eddie Hearn then called to say he wanted to spar me. But I said 'no, I'll fight him.'

"I'd met Joshua in 2013 at Prizefighter. We'd shaken hands. Eddie Hearn then called to say he wanted to spar me. But I said 'no, I'll fight him'."

It was the 2012 Olympic Champion's 10th professional fight and it was over after 90 seconds. Sprott recollects a surreal camp, which lead to his subdued showing.

"Nobody felt fussed about it. He's the rising king, just go in and get the money. That's what it felt like."

Sprott either fought or sparred most of the world's top fighters between 2000 and 2015. He rates Wladimir Klitschko as the best technical fighter, but remembers being bedazzled by a young Tyson Fury in training.

"He was very good. I knew he was six-foot-nine, but I couldn't believe how light on his feet he was."

But who would Sprott back to win a showdown between Joshua and Fury?

"I'd probably lean to Tyson Fury. He's a born fighter. If Joshua comes in [light] like he did for the rematch with Ruiz Jr, it's a 50-50 fight. But if he comes in looking like Mr. Universe, definitely Tyson Fury."

Evander Holyfield compares the attributes of both amid continued interest in an undisputed world title fight between the two British heavyweights.

Sprott mixed in illustrious circles, but is perhaps best remembered for his domestic rivalries; the two matches against Harrison and the trilogies with Danny Williams and Matt Skelton.

While Harrison's 'punch from the Gods' levelled their head-to-head at one-all, the series with Williams and Skelton suggested Sprott was a man who learned from losses.

He first challenged Williams for his British and Commonwealth titles in 2002, but was under-prepared after taking it at short notice.

"I'd been in Barbados with my family, having a good time, eating and drinking. My sister said I had a 'massive gut' on me and she'd never seen me like that. All you can do is your best, but I lasted seven rounds and then gassed."

The pair fought for the same belts again in 2003. Williams won earlier this time, albeit in contentious fashion.

"I was sharp. I was messing with him. But Danny started hitting me with low blows and the referee, Terry O'Connor wasn't doing anything. I was distracted complaining, but Danny threw in a combination, another low blow in the mix and put me down with a left hook.

"I was enraged. I got the immediate rematch because I was kicking off."

In January 2004, the pair fought for a third time and Sprott prevailed on points to become British and Commonwealth Champion.

"I just nicked it. It was [a dream]. That was the goal. I loved being British and Commonwealth Champion."

Sprott was not allowed to bask long in the glory, as mandatory opponent Matt Skelton loomed large on the horizon. They met in April of 2004.

"I wanted to rest but was told I'd be stripped if I didn't take it. It was a very tough night. It was in Reading, but he'd brought half the fans from Bedford. He was rough, from a K1 [kickboxing] background and kept hitting me in the back of the head. In the end, I went down with exhaustion [in the 12th round]."

Skelton edged Sprott by majority decision in July 2007 in the pair's second fight, but Sprott finally defeated his rival in 2010, by split decision, in the final of Prizefighter.

An intriguing subplot of Sprott's career was his talent for the three-round format. He twice won 'Prizefighter' in the UK (2010 and 2013) and finished runner-up in a New Zealand edition in 2014. Modestly, he puts that down to "remembering the amateurs," rather than any unique skill or tactic.

Sprott's boxing story may yet have a footnote. But he's not waiting around for a farewell fight. Before lockdown, he was building a personal training business. For people looking for an instructor with a tale or two to tell, few could surely compete with Michael Sprott.