Ryder had lost three British title fights, two of them at middleweight heading into his challenge for Smith's WBA super-middleweight title in November.

Smith was fighting at home in Liverpool, was undefeated, six inches taller than 'The Gorilla' and had a six-inch reach advantage. Not many gave the Londoner much of a chance. Smith was 20/1 on with some bookmakers, but the odds belied the absorbing boxing match that played out.

Come the final bell, pundits ringside were split over who'd won. Tension grew as people pondered whether Smith's meteoric rise through the sport was set to turn into a tailspin on the cusp of a rumoured showdown with one of the biggest names in the sport, Saul 'Canelo' Alvarez.

The suspense was snapped though as the judges returned a unanimous verdict in favour of the champion. Six months on, Ryder's sense of injustice still burned as he spoke to Sky Sports from his Islington home.

"I still feel like I won the fight. My anger isn't towards Callum Smith, it's the judging. I think it's ridiculous someone had it to Smith by six rounds. There's no way. If it had been a draw or they'd given it to Smith by one round, you could wipe your mouth of it and say, 'well, I knew I needed to get the knockout.' The scorecards were just so far from the truth, it leaves a sour taste."

Not that Ryder is a bitter man. He hails 2019 as a "great" year for him. The knockout win over Bilal Akkawy in Las Vegas in May and the performance against Smith not only strengthened his belief in himself, but also his trainer, Tony Sims.

Did he have a bad night or did I just box the perfect game plan?

"The plan was basically to take his (Smith's) advantages away, his height. He's very good at his catch-counter. He's very good up close, he's very good at range. So, get in mid-range where he's not fighting to his strengths, outwork him, be sensible with head movement, high guard to catch the shots," Ryder recalled.

"Did he have a bad night or did I just box the perfect game plan? Tony's put a game plan in place and I've executed it properly."

Ryder is also keen to throw credit in the direction of Dan Lawrence - his strength and conditioning coach, and the Head of Performance for Matchroom Boxing.

"The work with Dan has been unbelievable. In the development of strength and power, even down to the diet stuff. Before that fight, we were living in a flat together for three weeks and went up to Liverpool on the Wednesday just to make sure no stone was left unturned.

"We did the same in America, ahead of the Bilal Akkawy fight. Two of my best fights, he was sorting all the food. Everything was planned out, the weights, the nutrients, the proteins, the carb sources." 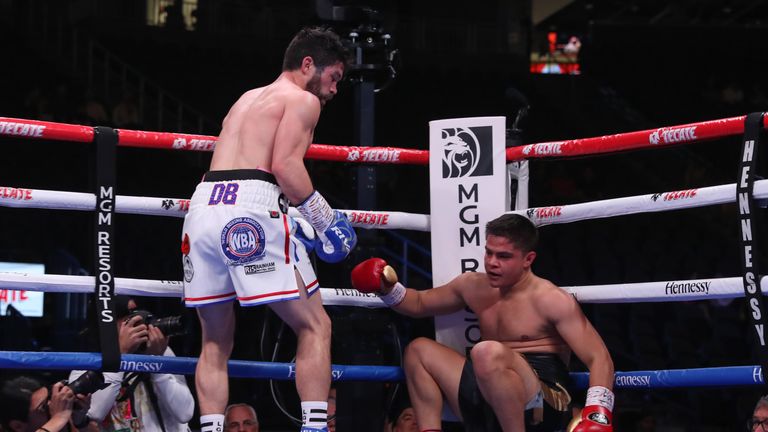 Ryder is a role model for any young boxer who experiences early adversity, but also a stark example of the importance of selecting the right weight.

"At middleweight, I wasn't absorbing anything on boxing, in terms of learning. The game plans and taking orders, all I could concentrate on was getting down to 11 stone six."

The judge's interpretation on November 23, 2019, led to an L on his record, but Ryder's stock rose regardless. Eddie Hearn told him "there are massive opportunities".

The coronavirus has stalled momentum, but Ryder has relished the upside of the situation - the chance to be a hands-on Dad.

"I've got a nine-month-old son, Brody, and a five-year-old daughter, Heidi, and it's been great. All the things I missed out on being in camp with my daughter when she was a baby, I'm seeing him crawling, climbing the furniture. It's been nice to see all the changes he's going through."

But for a man who boldly braved getting into the range of big-hitting 'Mundo' Smith, playing the role of teacher has proved too testing.

"Nancy (Ryder's girlfriend) is doing great with homeschooling Heidi. Phonics and the wordplay and that. I've not got the patience, so I'd rather do the morning walk with the baby and get him to sleep. It's a bit easier," he admitted, chuckling.

Unlike many fathers of young children, Ryder's sleep has been preserved in the build-up to fights because of Nancy's understanding of training principles. She's a fitness instructor and while nursing their newborn baby last autumn, she made sure Ryder's preparation for Smith wasn't impaired.

"She said to me, 'you can't sleep in the bedroom'. So we got a camp bed and I was sleeping in the living room. Then three weeks before the fight, I moved in with Dan. Sleep's so important."

While Ryder is enjoying family time, he is well aware of a growing financial anxiety in a sport of freelancers.

"At the end of the day, I just think it's your living. We're all out of work and struggling, so the sooner we get back, the better. I'm a fortunate position that my sponsors have stood by me, but these young fighters need a fight soon to put food on the table."

It is looking increasingly likely that fights will be behind closed doors and a blueprint for combat sports has been provided by the UFC. There has been concern in football circles that a lack of a crowd will dull players' motivation, but Ryder says that is not an issue in sports that spark primal emotion.

"I think it's different when someone is trying to take your head off. Even in sparring, you turn it on because you know it's on. It's a fight or flight moment."

In the absence of spectators, the list of possible fight venues lengthens. So where would Ryder like to fight?

"I really don't know. It's hard. If you're (holding a fight) in a gym, are you just in sparring mentality, so would it be better to be in an empty York Hall? I know it's been mentioned about doing it in Matchroom's back garden with a marquee. It will be like a punch-up at a wedding!"

The lack of fan noise brings other factors into play. UFC fighter Greg Hardy said he was able to hear commentators' analysis and that spurred him to make crucial adjustments en route to his win over Yorgan De Castro. But Ryder points out that eavesdropping on pundits could have combustible outcomes.

"It'll be strange hearing commentators. If you slip a shot and they say it landed, you'll want to stop and tell them it missed. You could be having an argument mid-fight!"

Ryder doesn't have a punch bag at home and says he will need a 12-week camp when gyms are allowed to open. But when he's ready, who's next?

"Ultimately, I want the rematch (with Smith). Eddie Hearn says it can happen. There are big fights for him at super middle or light heavy. I suppose he was hoping for Canelo, but it's all up in the air."

On the subject of four-weight world champion 'Canelo' Alvarez, Ryder's unequivocal - he'd jump at the chance.

"I'd love to. It's a modern-day great. Don't get me wrong, I'm going in with the ability thinking I can beat him, but it'd just be great to share the ring with one of the greatest fighters of all time."

A date with the flame-haired Mexican might seem a long shot. But five years ago this month, Ryder was stopped by Nick Blackwell in a British title match at middleweight. Who then would have foreseen him pushing Callum Smith all the way in a world title fight at 168 pounds?

Certainly, with Ryder's renewed self-belief and faith in the team around him, he's not counting himself out of any possibility.

"I've always said with Dan - who's a real pro - and Tony Sims by my side, anything is possible."