Kristian Laight: Despite 279 defeats from 300 fights, he says he emerged with success

"I used the game and it uses you"

Two years after the 300th, and the very last, final bell of a boxing match, a sound so familiar to Kristian Laight, he has nothing but pride for how things went.

The boxer who lost 279 times in 300 fights and never knocked anybody out regrets just one thing - he must now deliver bathrooms for a living and he will never replace "the best job I'll ever have".

At first glance Laight's long catalogue of losses, and the reasons behind it, are deeply cynical but his explanation makes you think. Has he intelligently exploited a fair-and-square loophole in the system, surviving a sport that can be cruel to become one of the few to genuinely retire without remorse?

Boxing might have forgotten Laight by now, and the feeling is mutual. Sort of.

Laight first told his bizarre story to Sky Sports immediately after retiring on 300 fights in 2018. He was brutally honest about his motivation and remains so, but this time you wonder if Laight is determined not to admit he once had a real passion for boxing.

He pauses for a very long time, again, when asked if he misses anything else: "I miss the people and the buzz it would give me.

"But in the grand scheme of things? No, I don't miss boxing… much."

Can he replace that buzz? "Not really, no, but I'm trying. I still watch boxing on the telly, I still talk to my mates about it."

He should be someone that the sport has chewed up and spat out. Not good enough. Who's next? Except Laight knows this and accepted it a long time ago.

But surely he can't be so cold? Surely, at some point, he stepped into a ring or went to the gym just for sheer passion? 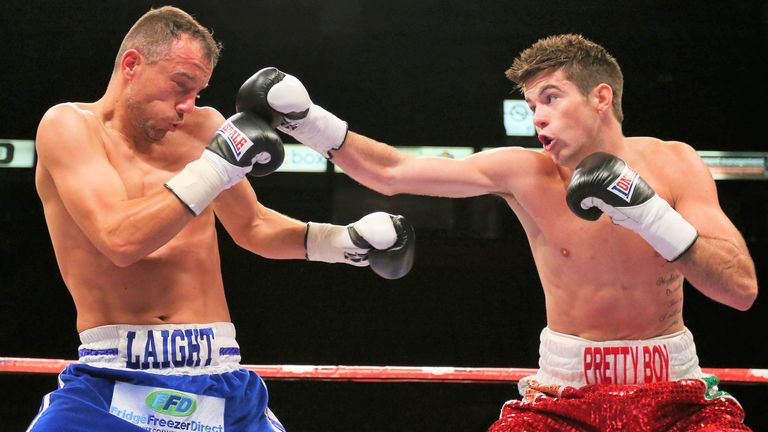 It became, towards the end, just a job.

"I loved it for the first couple of years but then I got into the journeyman mode," he said. "Then it became just a job.

"I only had 10 amateur fights and got tempted out for the money. I had a few fights on the road because I couldn't sell tickets, and I soon realised that if it's a close fight the referee probably won't give it to you.

"It became, towards the end, just a job. Dragged to the gym. I had to go running to lose weight because it was a job, and I needed the money."

This is where the criticism creeps in for his cynicism. The most interesting part of Laight's record (12 wins, 279 defeats, nine draws) is that he was stopped just five times. That's because a stoppage carries a minimum 28-day suspension and, as a result, no income for a month.

"I just started trying to get through the fights - cover up and hear the final bell," he said. "It became a weekly thing.

"It became easy. I've never had great skill but I found out that I was tough. I could fiddle through rounds. With experience I learned what I was doing."

He claims that he was the underdog in every one of his 300 fights which explains losing 279 times.

"I get criticised but even if I wanted to win, I couldn't. I can't match those kids for skill or fitness but I can get through the fight and give them four rounds of good boxing.

"I was getting paid to fight lads who were always better than me. I turned it into a job and a weekly income.

"I completely ignore criticism, it doesn't bother me. I knew I would never be a world champion. But I was quite clever."

Laight must have had some low moments, such as the 77-fight winless run he endured?

"Nope. Never, ever bothered. Early on, once I knew about the politics, it was just a job."

There have been nine glorious victories but, Laight complains, there should have been many more.

There is bitterness in Laight's voice, understandably, but that suggests he does have a degree of genuine sporting passion. Did those injustices fuel him to come back stronger?

He pauses and you know what he is going to say.

"Yes… and the money of course."

Laight would still be going now but can no longer get licenced on medical grounds and has done his bit to inspire a new generation of boxers. Well, sort of.

"Lads who want to be journeymen, wannabes, come to me and ask advice," he said. "I get Facebook messages and give lots of advice to lads who basically want to earn money on the road. They want to box as often as possible to earn a good wage.

"It can be an easy, easy job if you keep yourself fit. It can be easy money, potentially £1000 per fight. It can be a weekly wage if you have a good manager and you're tough and fit.

"I was asking my manager for weekends off! I said: 'Please, not this weekend!' But he always gave me a fight. It was hard to plan things around my boxing. I could potentially plan a weekend off, but the phone would always go.

"It was a fantastic job, the best job I'll ever have."

Laight's career was unique and maybe he did genuinely take more from boxing than the brutal sport took from him. Too many boxers retired unfulfilled but Laight, a father with a stable new job plus other exciting business interests, is not one of them.

"Of course I did. It's put me where I am today. I'm fit and healthy, I had 300 fights and earned a good bit of money out of it. It was a good experience. I am proud of it. I look back and I'm happy."