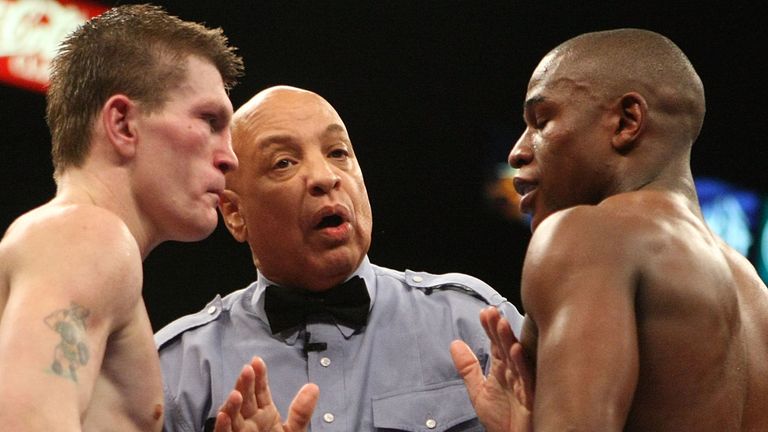 Fifteen years ago Hatton upset pound-for-pound feted Tszyu in his home city of Manchester to capture the IBF light-welterweight title, his greatest result. Two years later in 2007 his undefeated record was taken by Mayweather in Las Vegas.

"Against Kostya Tszyu, with a referee who let the fight flow at a distance and up close, I would have beaten anyone that night including Floyd," Hatton told The Boxing Show on Sky Sports.

📺 Ricky is live now on The Boxing Show on @SkySportsNews as we relive this classic! pic.twitter.com/9Qg78yFugY

"I'm not saying I was a better fighter than Floyd. But the right tactics on the right night at the right time? Even the best can be beaten.

"If I fought him on that night, I think I might have beaten him."

Hatton said about the glorious night in Manchester when Tszyu failed to answer the bell for the 12th round: "They called that my Mount Everest. Once I reached the pinnacle where do you go?

"I would have done better against Mayweather and Pacquiao if I hadn't burned the candle at both ends.

"People said that one day my lifestyle would catch up to me. When it came to those fights, it caught up to me."

📺 Ricky is live now on The Boxing Show on @SkySportsNews! pic.twitter.com/RMG1RZFF1B

Hatton was a major underdog against Australia's Tszyu on June 4, 2005, and 15 years later remembers the nerves he felt.

"In the build-up we were confident, training hard, we had our game-plan," he said. "On the day of the press conference I saw the amount of coverage and interest. Then at the weigh-in.

"On the night I thought to myself: 'I've had a lot of big nights especially at the Manchester Arena but this is the Premiership now, this is the real McCoy'.

"There was a nervous tension in the atmosphere because everybody wanted me to do it, but 80 per cent of my fans thought I wasn't going to.

"When the fight is thrust upon you, you look across the ring at Kostya, you need to have faith in your game-plan and ability. That got me through it. You've got to have the confidence to apply your game-plan even against a formidable fighter like Tszyu."

📺Watch the extended interview on The Boxing Show today at 2pm on Sky Sports News pic.twitter.com/27AJIM52OV

Hatton explained: "The tactics? Make a fast start because he was the older man and had been knocking people out so quickly. He hadn't had plenty of rounds under his belt. I had to stay safe and not take chances.

"We got off to a good start.

"Kostya, after two rounds, knew he had to up the pace to stay with my work-rate.

"He settled into a rhythm where he was putting rounds in the bank. I felt it was slipping away. [My trainer] Billy Graham said: 'Keep working and eventually he will break'.

"After nine rounds Billy asked: 'How does he feel?'

"That's what I did. It was hard. But I knew it was my chance. The game-plan we'd worked on. I knew I could be a few rounds behind but when he dwindled, I had to put my foot on the gas and take advantage.

"Down the home straight I recaptured the momentum and he quit on his stool. I can't describe that feeling."