Harper vs Jonas: Unbeaten US Olympian Mikaela Mayer warns that Terri Harper will 'never catch up to me'

"If I were to fight her? I would take her out of that comfort zone that she is in, and take it to her" - Harper defends her title on Friday, live on Sky Sports

Terri Harper "isn’t well-rounded" and her lack of a major amateur career will eventually cost her, according to her divisional rival Mikaela Mayer.

WBC super-featherweight champion Harper makes the first defence of her gold against Natasha Jonas on Friday at Fight Camp, live on Sky Sports, and has Mayer keeping a close eye on her.

"There's no hard feelings towards her," 2016 Rio Olympian Mayer told Sky Sports about Harper. "I just want to fight her, kick her ass and take her belt! 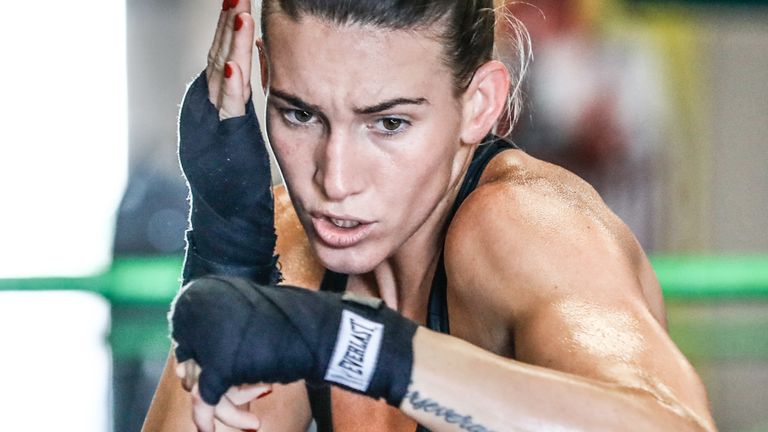 By the time she gets to the top level? I'll be two levels ahead of her. She'll never catch up to me.

"If I were to fight her? I would take her out of that comfort zone that she is in, and take it to her.

"She has good skills - she's tall, uses her reach well, has a good jab. Solid, basic foundations. She doesn't have anything that is complete trash or not technically sound.

"But she isn't well-rounded yet. She still has a long way to go.

"She will develop over time. But by the time she gets to the top level? I'll be two levels ahead of her. She'll never catch up to me."

Mayer insists her gruelling experience of getting to the Olympics has battle-hardened her for the pro game in a way which Harper has not benefitted from.

"It makes a huge difference," she said. "I learned so much in the amateurs and, only now, I'm coming into my own.

"Terri is 23 and a world champion? I don't wish I was 23 again, trust me, because I was training hard and fighting all of the time. Now at 30 I have all the experience, I have strength which takes years to develop, and confidence.

We can debate lingo all we want but we all know @terriharper96 will have to come to America to fight me if she wants to truly build her career. #espn @trboxing

Mayer is unbeaten in 13 pro fights and is targeting a title shot against WBO champion Ewa Brodnicka.

"[My promoter] Bob Arum told me to my face: 'We will get you a world title fight'," Mayer said.

"That was solidified [after my fight] that I'm ready for it.

"At least Terri tries to fight. It's so hard for me to respect the long-standing champions in our division who have held their belts for years without even trying to unify.

"Those times for women's boxing are done. Me and Terri are hungry - we're trying to unify these belts.

"These long-standing champions are done. They won't make it through us. Just take the pay-day and go, because they won't last with us. Not with the hungry girls that are coming up in our division."

Mayer racked up her most recent victory last month against Helen Joseph - she was initially pulled out after testing positive for coronavirus, although she took a second test the next day which came back negative.

"I wasn't too stressed," she said. "I always knew things would work out how they should. And it did - it exceeded my expectation.

"I felt sharp, strong and fast.

"I knew she would pressure me but I envisaged myself doing exactly what I did. I knew she couldn't out-work me. She couldn't get the power off that she needed. She was too slow for me.

"They know I'm tall and long - one of the tallest in the division - so they can't stay on the outside with me."

Mayer expects Harper to "out-box" her challenger Jonas on Friday. Should their paths cross eventually, Mayer believes they should share in the ring in the US.

"For the girls in the UK, that's great, but for women's boxing to reach the level that we want it to, they have to build a fan-base in America," Mayer said.

"Eventually if they want to grow Terri's career, they need to come to America for a fight against me.

"Right now she is the world champion so she has more leeway and clout when it comes to that discussion.

"I would try to become a unified champion against Terri in my back-yard.

"And we're assuming Terri doesn't lose. She is one-dimensional.