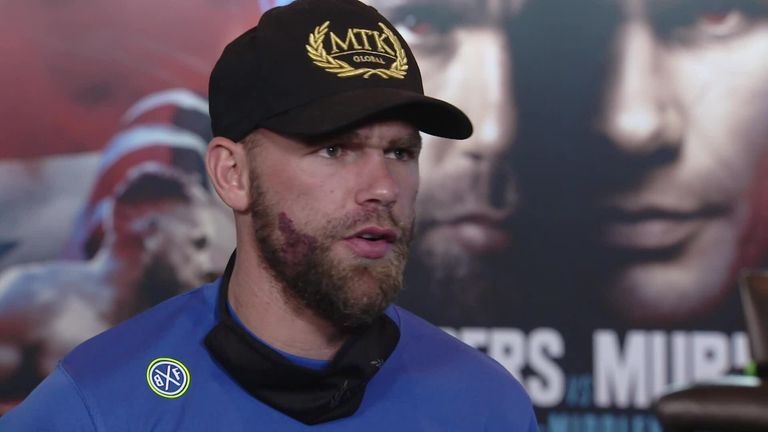 Billy Joe Saunders believes Martin Murray will be forced to consider retirement after he extends his unbeaten reign as WBO super-middleweight champion.

Britain's two-weight world king puts his WBO belt and perfect 29-fight record at stake against Murray on Friday at The SSE Arena, Wembley, with Saunders hoping to earn a lucrative fight in America.

Murray has earned the respect of Saunders with battling performances in four previous world title fights, but the 31-year-old is confident he will end his rival's lingering ambitions with a dominant victory.

I haven't been beaten on the UK soil since I've been 12-years-old. I've got a good track record, and I'm going to keep it that way.

"The only one really worthy of taking the fight which was available was Martin Murray. He's a four-time world title challenger. In my opinion, two-time world champion, so it's not a bad pick out of the bunch.

"I know Martin is coming to fight. I haven't been beaten on the UK soil since I've been 12-years-old. I've got a good track record, and I'm going to keep it that way.

"He's going to bring a good game, but afterwards he can go back to St Helens, take his cash back and have a good Christmas and retire with the family, because that's what I'm planning on doing, retiring him."

Promoter Eddie Hearn had lined up a massive clash with Saul 'Canelo' Alvarez for Saunders earlier in the year, which was called off due to the Covid-19 pandemic, and admits the WBO champion must stake his claim for another major fight.

"The pressure on Billy Joe Saunders is that he has to put in a really dominant performance," said Hearn. "That's what people are wanting.

"There's no pressure on Martin Murray. People in boxing give him a lot more chance than social media. The pressure on Billy Joe is not just to win, but put in a statement."

But Murray insists he is ready to pull off an upset victory that would add his name to a list of Brit boxers who have finally achieved their world title aim.

"No one has ever done it in five times in the UK," said Murray. "I believe Groves four, Frank Bruno four, and I truly believe that there's been a reason why I've picked myself up off the couch when times have been low and I've not wanted to go to the gym, but I've forced myself to get there.

"There's been a reason for it and it's for Friday. For me to achieve what no-one else has done in the UK."