Frank Sanchez has been working with Eddy Reynoso, the trainer of Saul 'Canelo' Alvarez, as he pursues a world heavyweight title fight after blasting his last opponent Julian Fernandez out of the ring

Frank Sanchez could be in "a very good position" for a world title fight after the Cuban heavyweight showcased his concussive power, says co-manager Mike Borao.

The unbeaten 28-year-old blasted Julian Fernandez out of the ring to secure the 17th victory of his career on the undercard of gym-mate Saul 'Canelo' Alvarez, who defeated Britain's Callum Smith on points in Texas last month.

Sanchez has been sharpening his explosive skills with Eddy Reynoso, the hugely respected trainer of 'Canelo', and could be within striking distance of a world title shot after rapidly climbing the rankings.

"Frank made three defences of his NABO title and the guys ahead of him (in WBO rankings) haven't fought in over a year and Pulev just lost.

"I've predicted all along that Fury fights Joshua and, as a result, the WBO title gets vacated sometime in 2021 leaving mandatory challenger Usyk versus someone for the vacated title. I still believe that remains a likely scenario, but of course one never knows.

"If the WBO title is vacated in early 2021 as a result of Fury versus Joshua, Frank will be in a very good position to challenge for the WBO title, and he will no doubt shine."

After teaming up with Reynoso in 2019, Sanchez even sparred with 'Canelo', and Borao is confident the former Cuban national champion will be ready to threaten any of his rivals.

"I think working with Eddy and Canelo is an incredible benefit to Frank, if for no other reason than the environment of champions surrounding him is going to bring out the best in Frank," said Borao. 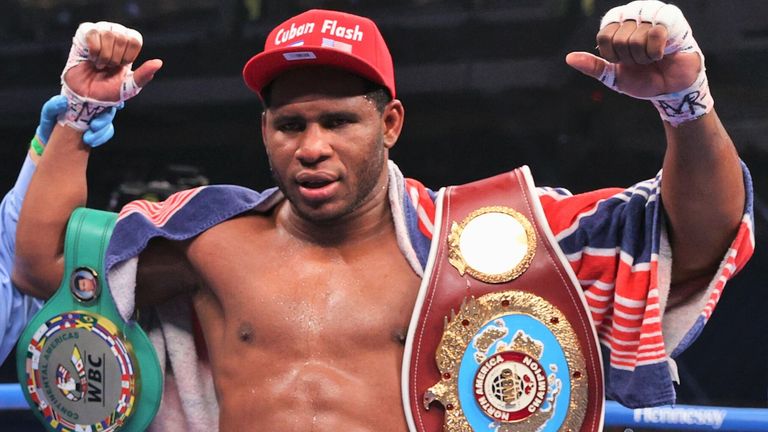 "Frank feeds off the energy Eddy and Canelo put out. Eddy, Canelo, Ryan Garcia - it is a breeding ground for winners.

"Frank is going to be very hard to beat backed by that kind of perfection and support."

Sanchez, who is also guided by co-manager Lupe Valencia, ended 2020 with two victories in two months and could soon resume his assault on the top division.

"Frank has worked hard over the past few months, fighting on major shows in November and December," said Borao.

"We are going to give him a break until mid-to-late January so his body can fully recharge.

"That said, I expect him back in the ring in late February or early March as Frank's services are in very high demand."