"Fury is a very versatile athlete so I am personally focusing on AJ, and what he brings to the table," says one of Anthony Joshua's trainers, Joby Clayton, after British rivals sign deal for undisputed fight

Anthony Joshua is training for "a whole host of techniques and tactics" that Tyson Fury may use, says trainer Joby Clayton.

Joshua and Fury have signed a two-fight contract to decide an undisputed heavyweight champion this year, in what will be the biggest fight of a generation.

"It's never too early to talk about basic game-plans. We are laying the foundations in preparation for camp," said Clayton, who works alongside Joshua's head trainer Rob McCracken, to Sky Sports.

"My job is to prepare AJ to his best ability. I know that when AJ is AJ, he's a handful for anybody.

"The most important thing is that he focuses on himself.

"Fury is a very versatile athlete so I am personally focusing on AJ, and what he brings to the table to combat a whole host of techniques and tactics that he might face.

"AJ is doing some wonderful work, training with a wonderful energy. This is a special time in his career. I'm excited to see what the next few months hold.

"I have a saying; coaches have to get boxers to train, but they have to get champions to rest. We have to make sure AJ rests at the appropriate times because he is so dedicated." 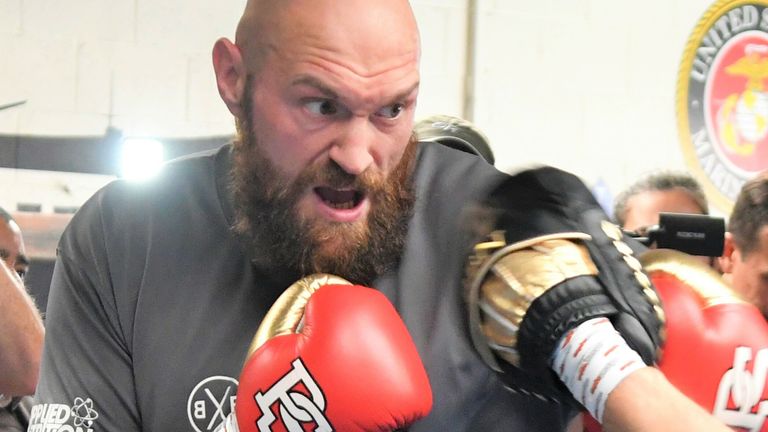 Fury has also worked with a host of different trainers from Peter Fury to Ben Davison and now Sugarhill Steward.

Joshua has been training at his amateur gym in Finchley, north London, this week as he hones his skills.

Joshua's promoter Eddie Hearn previously told Sky Sports: "All parties have now put pen to paper and we will be working hard over the next few weeks to confirm the site and date for the biggest fight in boxing."

Hearn previously said about Joshua's training: "Although he'd tell you that he's training just to improve as a fighter, I know that all he's thinking about is Fury.

Joshua tells Sky News about talks to face Fury
Instagram Due to your consent preferences, you’re not able to view this. Open Privacy Options

"He's working on the plan to beat this guy and become undisputed.

"I love the work he's doing, the improvements he's making, the mind-set.

"He has the mind-set of a winner, of a champion.

"Fury is a fantastic fighter but AJ will do a job on him.

"The preparation starts now. Don't think Fury isn't doing the same. He knows. This may be the biggest fight of all time."

Joshua and Fury's mega-fight still requires a date and a location to be confirmed.

Joshua previously told Sky News: "Any option. Home turf, Middle East, my back garden, your back garden. I don't mind where it is.

"I'm just ready to fight. I want that belt. I want to compete with Fury so all options are open to me."

Hearn previously said: "Really, to give us any chance [of the fight being in the UK], we need a full capacity.

"We want to make sure this fight goes ahead for both fighters. Both camps have a responsibility to maximise the revenue for their biggest fight - this is the pinnacle of their careers, the biggest moment, nothing will ever beat it.

"At the same time, we all recognise this is two Brits fighting for the undisputed championship of the world. If there is a way to do it in the UK? Fantastic."