"We want everyone to talk about how good a fight this was and not about contentious scorecards again"; trainer Joe Gallagher says Natasha Jonas is determined to avoid any controversy in Katie Taylor fight Natasha Jonas could raise an objection about the judges for her fight against Katie Taylor with trainer Joe Gallagher warning that "the eyes of the world are watching".

Jonas challenges Taylor for the undisputed world lightweight titles on May 1, live on Sky Sports Box Office, in a repeat of their epic encounter at the London 2012 Olympic Games.

But trainer Gallagher has revealed how the ring officials will come under close scrutiny, with the Liverpudlian's team even prepared to make an official complaint. "There's been question marks over a few Katie Taylor decisions and Natasha Jonas' decision, so we want the best judges that the governing bodies have at ringside," Gallagher told Sky Sports.

"We want everyone to talk about how good a fight this was and not about contentious scorecards again.

"We'll be looking to know who the judges are assigned to the fight and if there is any that we're not happy with then we will raise an objection with the British Boxing Board of Control, and the governing bodies.

"We'd like to know who they are, the sooner the better."

Jonas was denied a world title triumph last summer when she had to settle for a hotly disputed draw with Terri Harper, the WBC super-featherweight champion. 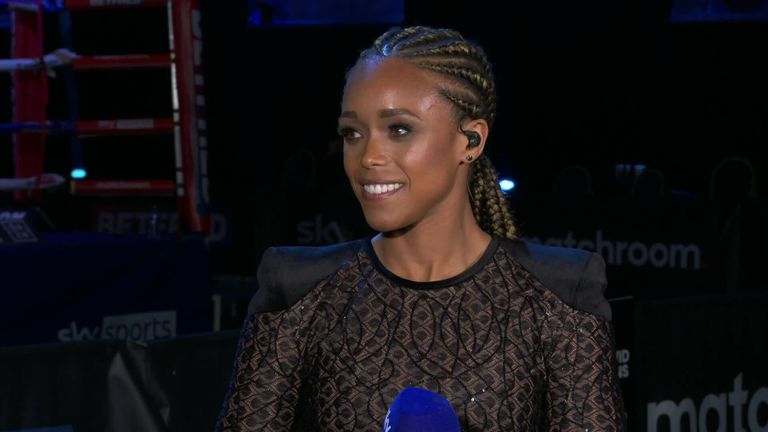 Gallagher also believes that Taylor was fortunate to receive a majority decision in her world title defence against Delfine Persoon in 2019.

"If you look at Natasha Jonas and Terri Harper, everyone all over the world thinks Natasha won that night, apart from two people," said Gallagher.

"Then you've seen Katie Taylor vs Delfine Persoon, everyone all round the world thinks Persoon won the first one, but Katie Taylor got it.

The eyes of the world are watching this and I can't have Natasha Jonas coming out of this fight, feeling hard done by, like she already has been done with the Terri Harper fight.

"They've both been involved in fights with contentious scoring. We've got to make sure that isn't the thing for this fight, and the right girl deserves it on the night.

"Not what she's done in the past or what she has now, or she's come in the ring as a champion. Whoever has done the best, score for the shots landing, and let's concentrate on the fight.

"You need all bases covered, even down to the judges, but the referee as well. The referees play a huge part. They are very cute in who they can say 'break' to, who they can make push back, give people rest time.

"The eyes of the world are watching this and I can't have Natasha Jonas coming out of this fight, feeling hard done by, like she already has done with the Terri Harper fight."