Anthony Joshua vs Tyson Fury set to be staged in Saudi Arabia on August 7 or 14, says promoter Eddie Hearn

"The tweet from AJ last night was, 'Come on, less talk, more action. Let's get this done!' There's no reason why it shouldn't happen this week"; promoter Eddie Hearn expects Joshua vs Fury announcement in next few days

By Richard Damerell and Paul Gilmour

Anthony Joshua vs Tyson Fury is set to be staged in Saudi Arabia on August 7 or 14, but promoter Eddie Hearn is 'frustrated' the fight is yet to be finalised.

Hearn admits that Joshua is growing impatient with Fury, who is yet to agree the remaining terms, but the Matchroom boss remains confident the fight will be announced this week.

"I think it's a very bad secret that the fight is happening in Saudi Arabia. To be honest with you, I don't mind giving you that information. Bob Arum [Fury's US promoter] has already done it.

"It's the same people that we did the deal with Andy Ruiz [rematch]. That event was spectacular.

"As partners, they were fantastic as well. We're very comfortable. Anthony is very comfortable, he knows those people. They've delivered on every one of their promises last time. We're ready to go.

"That's going to be the date. Of course you've got the Olympics finishing on August 7th, so in terms of a global spectacle, it would make sense to go on the 14th. That's one of the things to tick off in the next, hopefully, few days."

Fury has been inactive since he stopped Deontay Wilder to claim the WBC title last February, while Joshua is also eager to return to action after defending his WBA, IBF and WBO belts with a knockout win over Kubrat Pulev in December.

The tweet from AJ last night was, 'Come on, less talk, more action. Let's get this done!' There's no reason why it shouldn't happen this week.

"I saw the tweets from AJ. He's tired, the fans are tired, and everyone is tired," Hearn told Sky Sports News.

"We're in a stage where people are getting frustrated. The deal is done.

"Now we're on the finer details of the contract, which came back last Friday. It went back last night. They are on calls now in the office about it, and I think at some point people are going to have to take a little bit of a leap of faith in this deal.

"The tweet from AJ last night was, 'Come on, less talk, more action. Let's get this done!' 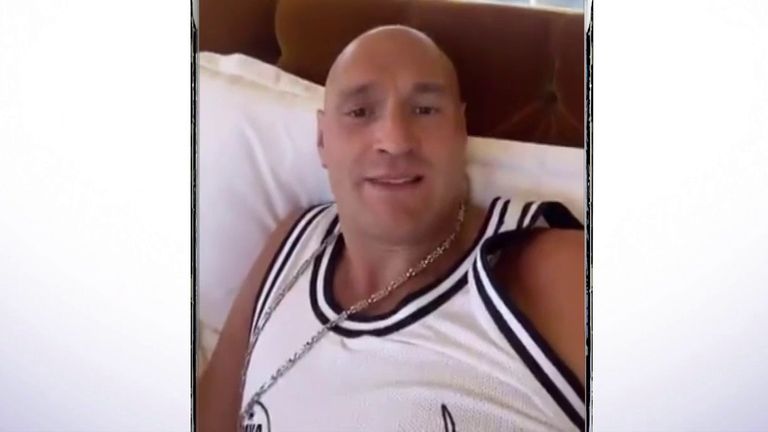 "There's no reason why it shouldn't happen this week. This is kind of like the moment where you could actually turn around at this point and say, 'This is dragging on too long, or I can't be dealing with this anymore.'

"But we have to nail this, and I'm not going to stop until I nail it, and everyone has just got to move forward collectively.

"We're ready to go from our side. We're not far away from their side and it is inevitable, but at the same time, we've got to close the door on it."

Fury's UK promoter Frank Warren has suggested that a deal will not be signed until he is guaranteed the fight purse, but Hearn is 'comfortable' about the funds available after staging Joshua's rematch win over Andy Ruiz Jr in Saudi Arabia in December 2019.

"I wasn't just intending to take a punt on it," said Hearn.

"It's a lot of money and we've done this before. We did the Andy Ruiz fight in Saudi Arabia.

"We know the magnitude of the people we are dealing with. We're probably a little bit more comfortable than they are, because they are new to this, and I get that, so we have to make them comfortable.