Floyd Mayweather will step back into the ring against social media superstar Logan Paul on Sunday at midnight, live on Sky Sports Box Office 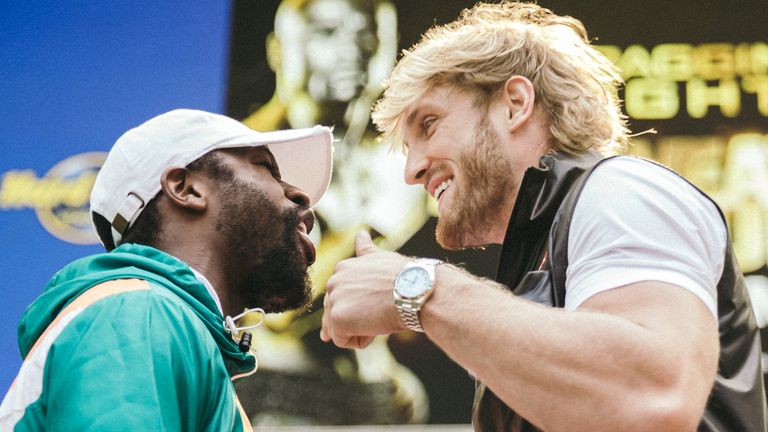 Floyd Mayweather and Logan Paul's exhibition match could end in a knockout but will not include judges or an officially announced winner.

The Florida State Boxing Commission has confirmed the ruleset for the match on Sunday at midnight, live on Sky Sports Box Office.

The rules for the weigh-in have yet to be officially confirmed - Logan Paul towered over Mayweather during their first face-off.

But Logan Paul has claimed on social media that he must weigh-in at 190lbs and Mayweather 30lbs less. For every pound overweight he is, he claimed, he will be fined $100,000.

In Mayweather's previous exhibition match, against Tenshin Nasukawa, the rules also stated no winner would be officially recognised - but Mayweather knocked him out in one round.

Previously, his 50th and final professional boxing match against Conor McGregor came after a dispute over the glove size.

McGregor had insisted on smaller gloves that the Nevada Athletic commission usually allowed but Mayweather agreed to it, and again emerged with a stoppage victory.

Logan Paul has said: "I'm 30 pounds heavier, I'm like six, seven inches taller. Half his age and I'm hungry, and I've got nothing to lose.

"It's a fight, so anything can happen."

"You know what, keep your eyes on this guy.

"I felt his power before. Listen to me, he can hit. I'm telling you, the boy can hit.

"Be careful. This might not be what you all think it is. The boy can hit.

"It is the great Floyd Mayweather, but this kid is bigger, and he's got some quick punches."