April Hunter defeats Klaudia Vigh on points with a 40-37 verdict to bring up her fourth professional win, while heavyweight Sol Dacres added his second pro victory with a fourth round stoppage of Alvaro Terrero April Hunter got the Newcastle crowd going after adding a fourth win to her professional record.

April Hunter sealed a stylish points win over Klaudia Vigh as she extended her perfect professional record in Newcastle.

The 26-year-old was a class above her Hungarian opponent, unloading crisp combinations from the opening bell as she earned a 40-37 verdict to secure her fourth straight victory.

Hunter had prepared by sparring with Savannah Marshall, the WBO middleweight champion, and a perfectly placed body shot hurt Vigh who stood firm until the final bell in the four-rounder.

"To be honest, I think I got carried away in the first round," Hunter told Sky Sports.

"I'm learning on the job and I'm sparring world champions.

"It's all rounds in the bank." 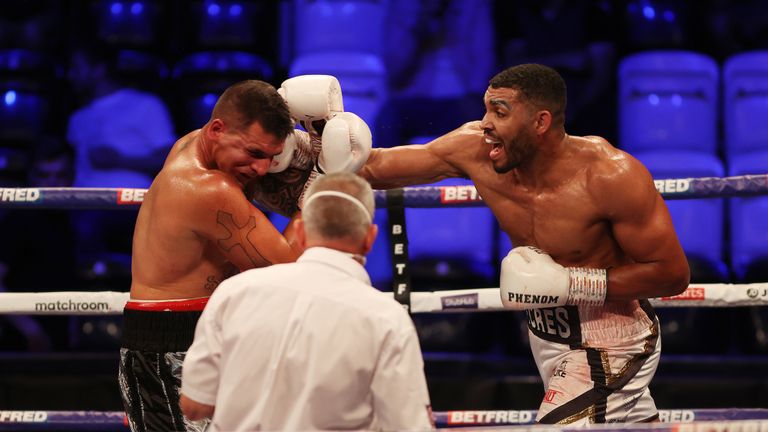 Solomon Dacres wins by fourth round stoppage against Alvaro Terrero.

Dacres sent the Spaniard wobbling back to the ropes with a flurry of punches, prompting referee Victor Loughlin to wave it off.

"I thought it was good, I didn't rush myself again," Dacres told Sky Sports.

"I took my time but the stoppage still came.

"Got the stoppage which is the icing on the cake."