Tommy Morrison conquered a boxing legend and starred in a 'Rocky' movie but will his son emulate the former world heavyweight champion?

Tommy Morrison starred in the 'Rocky V' movie alongside Sylvester Stallone before he defeated George Foreman to become the WBO champion in 1993; his son Trey resumes his own heavyweight career this weekend 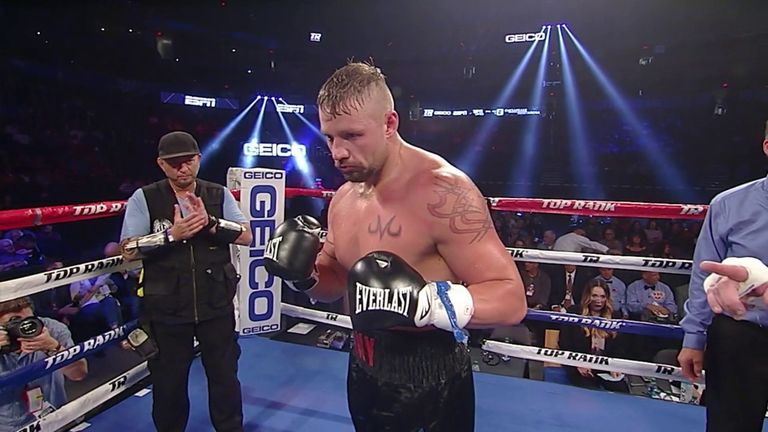 Tommy Morrison conquered a boxing legend and starred in a 'Rocky' movie, but his son has been warned that heavyweight giants could ruin his attempt to emulate the late world champion.

Trey Lippe Morrison has knocked out all 17 of his opponents and will resume his promising heavyweight career against Don Haynesworth on this weekend's Joshua Franco vs Andrew Moloney bill, which is live on Sky Sports.

His late father, Tommy Morrison, starred in 'Rocky V' alongside Sylvester Stallone before defeating George Foreman to claim the WBO title in 1993, and he later lost a brutal shootout with Britain's Lennox Lewis in 1995.

Top Rank boss Bob Arum, who is promoting Trey after guiding Tommy to world title success, told Sky Sports: "It will be interesting to see because he hasn't stepped up in competition.

"We used to make jokes when there was a big heavyweight like Nikolai Valuev.

"They were all stiff.

"Morrison's kid looks like Morrison but is relatively small compared to the heavyweights today."

The 31-year-old is yet to test himself against a recognised contender, despite a succession of early stoppage wins, which have meant he has not been extended beyond the sixth round.

Morrison's most recent fight ended in bizarre circumstances as Jason Bergman was unable to continue in the third round after suffering an ankle injury.

Watch Joshua Franco vs Andrew Moloney, from 3am on Sunday, live on Sky Sports.