Evander Holyfield was on the canvas twice during his two-minute defeat to Vitor Belfort; at 58 years old he was in his 58th fight of a legendary career but his comeback did not go as planned

Evander Holyfield was knocked down and soundly beaten in one round without landing a punch of his own by Vitor Belfort on Saturday night in Florida.

Holyfield is 58 years old and was returning to boxing for the first time in a decade at just a week's notice to replace Oscar De La Hoya, 48.

But he was a ghost of his former self and found himself on the canvas twice before the referee rescued him from further punishment inside the first round. 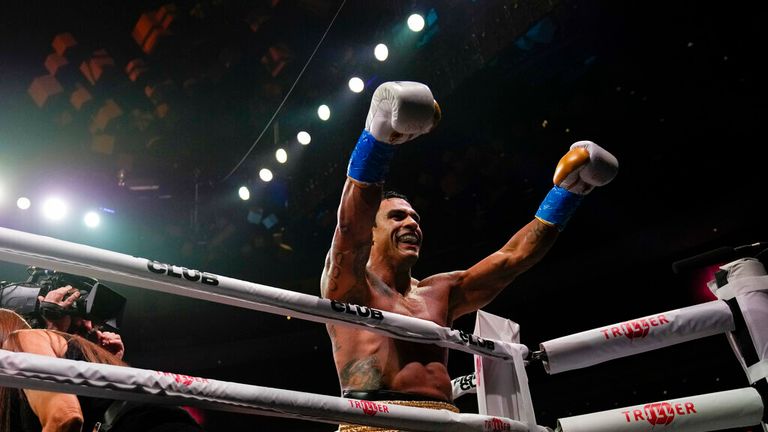 Vitor Belfort says that he wants to teach Jake Paul a lesson in the boxing ring.

Holyfield was hurt and staggered by an overhand left then, under pressure, was bundled through the ropes. Although it did not count as a knock-down, it was a warning.

Seconds later a Belfort left hand and uppercut had Holyfield flying backwards to the canvas.

Belfort let a flurry of punches go and, with nothing coming back from Holyfield, the referee jumped in to end the fight.

Belfort, 44, is an MMA icon whose only professional boxing experience was 15 years ago.

Holyfield is one of just two men (alongside David Haye) to win world titles at cruiserweight and heavyweight during a legendary career that featured fights with Lennox Lewis and Mike Tyson.