"That's what world-class fighters do. They just walk through people, who aren't on their level and that's what he did," David Avanesyan is assessing options for a world title fight after stoppage of Liam Taylor, says manager Neil Marsh 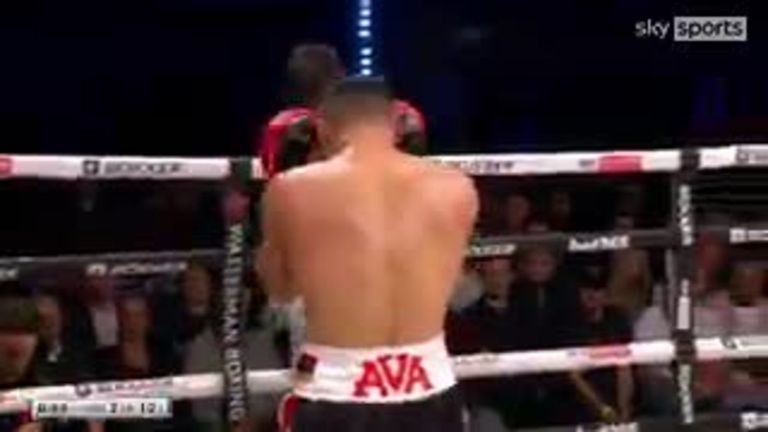 David Avanesyan's team are targeting a world title fight against Yordenis Ugas, who sent Manny Pacquiao into retirement with a defeat.

The Russian welterweight ruthlessly defended his European title with a second-round stoppage of Liam Taylor on last Saturday's BOXXER bill at The SSE Arena, Wembley.

But Avanesyan is now eager to challenge WBA champion Ugas who sealed a dominant points win over Pacquiao in August, in the final fight of the Filipino star's career.

Watch highlights as Ugas sealed a commanding win over Pacquiao

"The only ones that we think could withhold him is possibly Errol Spence and Terence Crawford, but they would be in a fight of their lives," Avanesyan's manager Neil Marsh told Sky Sports.

"If they didn't turn up, the same result would happen.

"Listen, David wants any of them. Ugas seems to be the easiest [to make], because Spence is a bit unsure with his career and I don't think there's a fight scheduled.

"Terence Crawford is scheduled to fight Shawn Porter, so the obvious one is the one who has just boxed against a legend. His profile has gone through the roof.

"He looks a good fighter, so yes, we are just trying to pick potentially the easy one to get hold of, more than necessarily the easiest opponent."

Avanesyan had shared a thrilling early shootout with Taylor, who adopted aggressive tactics before he was overwhelmed by the European champion's superior power.

"That's what world-class fighters do. They just walk through people, who aren't on their level and that's what he did," said Marsh.

"He couldn't really keep David off him, so they quickly adopted a fight fire with fire approach.

"Did he [Avanesyan] expect that? No. Do we understand why they did it? Yes. Did I think that would have happened in the fight? Yes.

"But I thought it would have happened after he had tried to keep us at distance for five rounds and then we would have dragged him into a similar scenario.

"David loves fighters coming at him, because it just makes his job a little bit easier. But he's very, very calm and experienced.

"When he put him down, some fighters would blow themselves out, but he plays the long game with a high intensity. Of course he was licking his lips, but we weren't taking anything for granted."

The 33-year-old has previously stated his desire for a showdown with Conor Benn, but Marsh believes Avanesyan's latest win would have provided a brutal warning to the British contender.

Marsh said: "I don't want to alienate Conor, because we respect him. But Conor already said in the changing room of the Josh Kelly fight, 'He's a beast.'

"I would expect that Conor sat there with his mates or his family thinking, 'I don't want none of that smoke.'