"Usyk says that he can fight Fury next if the offer is right and if AJ allows to do so," promoter Alexander Krassyuk says the Ukrainian star would be open to an undisputed world heavyweight title fight 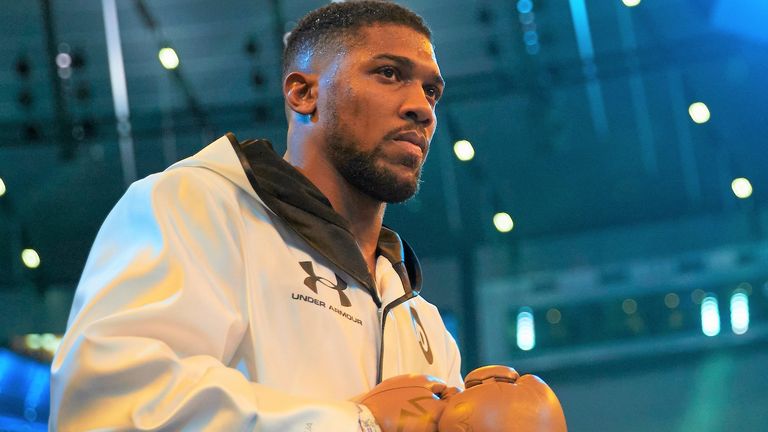 Oleksandr Usyk "heard that Anthony Joshua could consider stepping aside" so is willing to fight Tyson Fury to decide the undisputed champion, says his promoter Alexander Krassyuk.

Chinese heavyweight contender Zhilei Zhang also "heard chatter" that Joshua is mulling over taking a different fight, it has been revealed.

Joshua has already triggered a rematch clause to fight Usyk again next year for the IBF, WBA and WBO titles that he lost to the Ukrainian star.

The rematch is targeted for 2022, although a date or location is yet to be finalised.

Fury, the unbeaten WBC champion who has twice demolished Deontay Wilder, has no rival for his wish of a return in February or March because Joshua and Usyk are seemingly on a collision course, and Dillian Whyte has not been confirmed as his mandatory challenger.

Usyk's promoter Krassyuk told Sky Sports about the notion of Joshua opening up the division by changing his plans and accepting a different fight: "The talks on AJ's step aside have been around since Fury KO'd Wilder.

"I heard that Joshua could consider stepping aside if the money is right as he feels respect to the division and is willing to let the undisputed heavyweight championship happen.

"Usyk says that he can fight Fury next if the offer is right and if AJ allows to do so."

Joshua's promoter Eddie Hearn did not comment in response to Krassyuk, but had told Sky Sports that plans were being put in place for the second fight with Usyk.

"AJ is already in camp physically and mentally for the Usyk rematch, and it's all he has thought about since the night of the first fight," Hearn said last month.

Fury and Usyk have never lost in 51 combined fights and own every belt in the heavyweight division.

Top Rank's Bob Arum, who promotes Fury in the US, previously told Sky Sports: "If Joshua decides not to exercise his rematch against Usyk and decides to step aside, the fight we would like to make is between Usyk and Fury.

'Fury's preference is to fight Usyk, not Whyte'

"That's what Tyson would like. And I represent Tyson. That is his preference."

Zhang, the unbeaten contender from China who added a knockout win to his record last weekend, is keen on facing Joshua if the chance crops up.

"We heard some chatter regarding AJ [needing a new opponent] which we are open to," Zhang's adviser Terry Lane told Sky Sports.

"There are rumours that, if he does, then perhaps a fight in China against Zhang would be of interest. We have not discussed this with [Joshua's promoters] Matchroom."

Zhang, who lost to Joshua at the 2012 Olympics and has sought revenge ever since, is ranked at No 9 by the WBO and No 12 by the IBF.